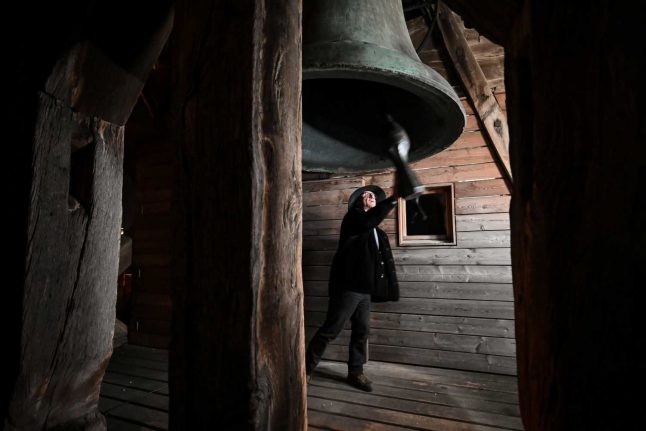 Nightwatchman of the Cathedral of Lausanne, Renato Haeusler manually rings the 3600kg "La Clemence" emergency bell in the Cathedral's belfry tower, amid the spread of COVID-19. Photo: FABRICE COFFRINI

The nightwatchman is ringing La Clemence, a bell made in 1518, to call for mutual solidarity among the Lausannois in the face of the global coronavirus pandemic, Hausler told AFP.

Its 3.4 tonnes of steel make a hell of a din which cuts through the still night air, above the city and out over Lake Geneva.

Its C note rings in harmony with those of Marie-Madeleine, Lombard and the four other bells hanging in the tower.

Standing in his felt hat with a lantern to light the way, Hausler peals the bell with three strikes, a pause, six strikes, another pause, then repeats the pattern.

Every night without fail, Hausler or one of his stand-ins calls out the hour from 10:00pm to 2:00am, north, south east and west from the bell tower, up 153 stone steps from the cathedral floor.

Lausanne is one of the last places in Europe that still has a nightwatchman as a living timekeeper. Hausler has been doing the job full-time since 2002.

The first written references to a nightwatchman date back to 1405, after a huge blaze ripped through the city. “During the disaster, the bell rang to encourage the townsfolk, to rally people together to fight the fire,” said Hausler.

Linked with a network of watchmen on the ground, the cathedral watchman, perched on the highest point in Lausanne, sounded the alert around the city as quickly as possible. Night watchman of the Cathedral of Lausanne, Renato Haeusler shouts the hour prior to manually ringing the 3600 kg “La Clemence” emergency bell in the Cathedral's belfry tower, on late March 27, 2020 in Lausanne. Photo: FABRICE COFFRINI / AFP

Centuries on, perilous times are back on the shores of Lake Geneva and the bell rings out for a full three minutes.

More than 13,000 people in Switzerland have tested positive for COVID-19 and more than 230 people have died in the new coronavirus pandemic, according to the health ministry.

The French-speaking Vaud region surrounding Lausanne has seen the highest numbers of cases of all of Switzerland's 26 cantons, with nearly 3,000 people infected.

The Alpine country has not confined its population indoors but outdoor gatherings of more than five people are banned. And in the evening, the streets of Lausanne, a student city that is usually very lively — especially on weekends — is strangely silent.

“Since these restrictive measures urging people to stay at home, it has completely changed,” said Hausler.

“It is quiet all week, even from 8:00pm, and when I get here, there is hardly any activity around the cathedral or even in the city so it brings a tranquility that I have never experienced before.

“There is a real calm which resembles what it would have been like in the past, before there was all this traffic noise.

“There is perhaps just one last thing that would bring us right back to how things were in the Middle Ages: turning out the lights.”

Besides Lausanne, only six other European cities are thought to keep up a nightly watch: Annaberg, Celle and Nordlingen in Germany; Ripon in Britain; Krakow in Poland, and Ystad in Sweden.