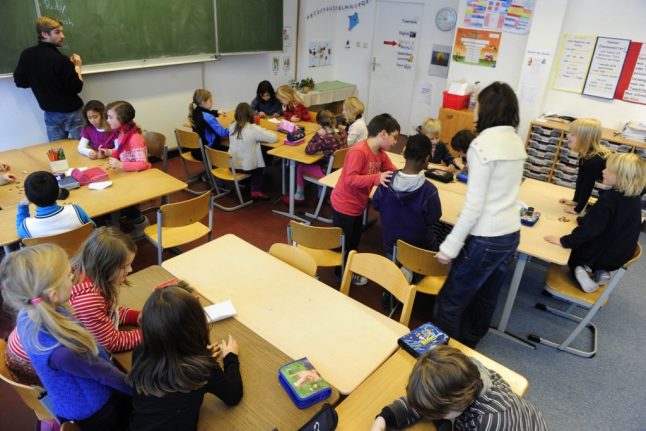 Schools are expected to resume on May 11th. Photo by AFP

What will happen on May 11th?

According to the Federal Council, all compulsory primary classes, closed since the government declared the state of emergency on March 16th, should resume on May 11th. This includes two years of kindergarten, followed by six years of primary school.

Secondary and vocational schools, as well as universities, are expected to resume on June 8th.

The Federal Council will make the final decision on school re-openings on April 29th.

Why did the government decide it is safe to resume primary education, even though the coronavirus pandemic is not yet over?

“Based on the current knowledge, few children get infected with the Covid-19 virus”, Daniel Koch, head of the infectious diseases unit at the Federal Office of Public Health said in an interview.

In Switzerland, 104 children under 10 have been tested positive for coronavirus to date. But the real number may be higher, as not everyone has symptoms that warrant testing.


Why is there opposition to the re-opening of schools?

There are several reasons. One is the uncertainty over the government’s assessment that children are generally safe from coronavirus and that they don’t transmit the disease among themselves or to others.

“There is currently no scientific data to conclude whether kids are vectors of transmission or not. So the decision to resume classes is based on politics, not science”, Philippe Eggimann, president of the medical association of Vaud told Le Temps newspaper.

Also, while health authorities said protective measures would be implemented in schools, they did not yet specify what those measures are, raising concern among teachers and parents that protections may not be sufficient to prevent contagion.

This uncertainty has prompted the Syndicate of Public Services (SSP) to ask for a postponement in the re-opening of compulsory schools.

“At this stage, there is nothing to confirm that health prescriptions (physical distance etc.) can be respected in schools, in view of the many practical problems: recreation, lunch, not enough sinks in certain buildings, public transport etc.”, SSP said in a statement.

Where is the opposition the strongest?

The concern is particularly high in French-speaking Switzerland, where the pandemic has killed four times as many people as in the Swiss-German part.

The French-speaking Teachers' Union (SER) is refusing to start teaching under the current conditions. “It must be made clear how the health of the teaching staff and the pupils is protected. We need clear guidelines as to which hygiene measures we should implement”, said SER President Samuel Rohrbach.

READ MORE: Coronavirus in Switzerland: Why have the French and Italian-speaking regions been so hard hit?


“If this is not the case, it is an illusion to believe that schools can be re-opened”, he said, noting that parents will refuse to send their children back to class under these circumstances.

“It is important that the return to school is not rushed”, Rohrbach added.

Francesca Marchesini, president of the Geneva Pedagogical Society, said “we must not imagine for a minute that we will be able to respect social distancing in primary schools”.

Given the uncertainty surrounding the government’s plan, the Vaud Pedagogical Society also requested a postponement of the back-to-school decision, pointing out that “economic issues must not take precedence over health security issues”.

What do parents say?

Some parents of primary school pupils say they will not be sending their children back to school on May 11th, regardless of what health authorities say.

One of them is Adriano Aguzzi, professor of neuropathology at the University Hospital in Zurich who tweeted “Frankly, I am not planning to let my kids go back to school, no matter what Koch says”.

Another parent, Chiara Cellarius, told 20 Minuten news portal that she had already written to the school authorities in her community, announcing she may be keeping her daughter at home. “Even if compulsory schooling is back, it is still our life, our child and we decide”, she wrote.

But if schools do re-open on May 11th, parents will have no choice but to send their children to classes.

“If compulsory schooling will come into force again, parents who keep their children at home will be subject to fines”, Peter Hoffmann, a legal expert specialising in school law said in an interview.

The amount of penalties varies from canton to canton, but could in some cases reach 1,000 francs, he said.

Why is it important to resume primary education, despite potential risks?

According to epidemiologist Antoine Flahault, director of the Institute of Global Health at the University of Geneva, “If we don't reopen schools, we can't let people go back to work”.

“De-confining does not mean that we will have zero cases during the summer. We will allow social and economic life to regain some of its momentum and hope to control the situation”, he added.

And Dagmar Rösler, president of the German-speaking Teachers' Association, said it is important that schools are opened according to national guidelines. “We are happy when life comes back to schools. In the next few weeks, accompanying and protective measures will be worked out on how to teach without endangering risk groups”, she said.