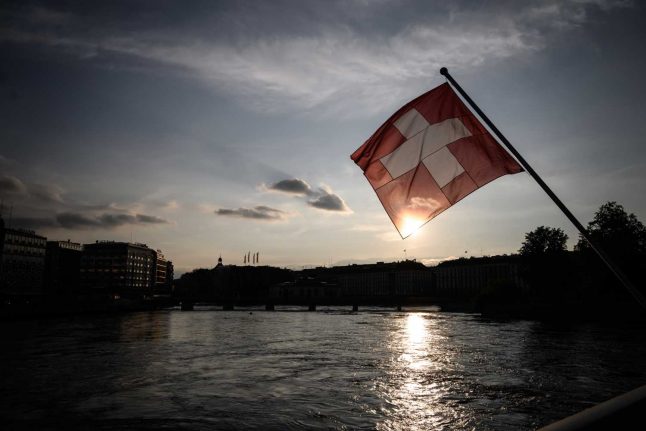 Nothing says 'the end of lockdown' like a Swiss flag waving in the wind. Photo: FABRICE COFFRINI / AFP

Swiss president Simonetta Sommaruga told the media “Switzerland is reborn”, saying “we now know it is possible to control the virus”.

Berset also announced that the state of emergency, first declared on March 16th, will officially end on June 19th. You can go to restaurants and bars in bigger groups

Previously, groups at restaurants in Switzerland could not exceed four, and there was a voluntary requirement that all customers provide their data so that they can be tracked and contacted in the event of an outbreak.

As of June 6th, the maximum of guests per table will be scrapped – but larger groups will be required to register, with the information of each attendee to be kept.

A distance of two metres between groups remains mandatory.

You (or your kids) can go on summer camp

Summer camps will again be allowed from June 6th, provided they don’t exceed the maximum of 300 children.

Complete lists of those in attendance must be kept.

READ: How effective have Switzerland's coronavirus lockdown measures been?

Camping at regular camping sites – whether in a tent or in a camper van – is again allowed.

Middle schools, vocational schools and universities will again be allowed from June 6th.

You can train and play sports again

Training for all sports will again be allowed from June 6th, regardless of group size.

All sports – except those with a high level of contact – will be allowed to train again.

The one requirement is that a list of those in attendance must be kept.

Party people will be pleased, as they can now visit discos and nightclubs again.

Although the risk of transmitting the coronavirus would appear high in nightclubs, the Swiss government requires establishments to adhere to a range of distancing and hygiene rules.

This is set to include a maximum of 300 people at each establishment, while patrons will also be expected to keep two metres apart at all times.

Nightclubs – along with all bars and pubs – will also have to close at midnight.

However, as reported by Swiss media outlet Watson, clubs will again be allowed to open at 6am – enabling after hours parties.

You can go to zoos, campsites, casinos, amusement parks and swimming pools again

Campsites, swimming pools and leisure facilities such as rope and climbing parks can reopen on June 6th.

You can visit brothels again

From June 6th, brothels and sex work is again allowed to take place.

Brothels have listed sex positions which are approved – and which should be avoided.

Swiss media outlet 20 Minutes also said that patrons of adult services have been advised that 'face-related services' should be avoided as much as possible.

Grandparents can babysit their children again

Seniors have been encouraged to again resume their social life, while grandparents may also babysit their grandchildren once more.

You can meet in groups, attend sporting events and demonstrations again (actually you could do this from May 30th)

Groups of up to 30 people will again be allowed to meet in public places from May 30th, increasing from the current limit of five.

The maximum number will be higher for events. From June 6th, groups of up to 300 people to be allowed for protests, trade fairs, private events and ceremonies, theatre performances and film screenings.

People at these events will however be required to keep a distance of two metres at all times.

Demonstrators will need to apply for a permit and will need to explain how they plan to minimise the spread of the virus.

You can go to sporting events again (well, from June 8th onwards)

Groups of up to 1,000 people will be allowed at sporting events from July, however venues will need to provide indications as to how they will ensure that social distancing requirements are met.

What else can you do soon? Cross the border from June 15th

Complete freedom of movement will be restored in and out of Switzerland by July 6th at the latest.

From June 8th, applications from EU/EFTA workers will again be processed. Swiss companies will also be allowed to hire workers from non-EU/EFTA countries provided they are in a highly-skilled category, and this is either in the public interest or there is an urgent need.

One further issue to be discussed is the fate of Switzerland’s southern border.

Italy unilaterally announced on May 17th that it would be opening its borders on the June 3rd – much to the surprise of Swiss authorities.

Switzerland said today that the border with Italy will not be opened on June 3rd.

Karin Keller-Sutter said during the press conference that she respected Italy's decision – but the border opening would not be reciprocated.

“Of course we are also in contact with Italy. It had announced that it would reopen its borders to tourists on June 3. We respect this sovereign decision.”

However, Switzerland and other neighbouring countries in Italy want the reopening to take place in a coordinated manner. We will not open our borders with Italy on June 3rd.”

Therefore, if Italy does open the border earlier, it would be possible for Swiss residents and citizens to cross into and back out of Italy from June 3rd. Italian residents would however not be able to cross into Switzerland. When will the next round of lockdown relaxations be made?

On June 24th, the Federal Council will announce further relaxations – including whether larger events are to be allowed. Currently, events with more than 1,000 people are banned until August 31, 2020.