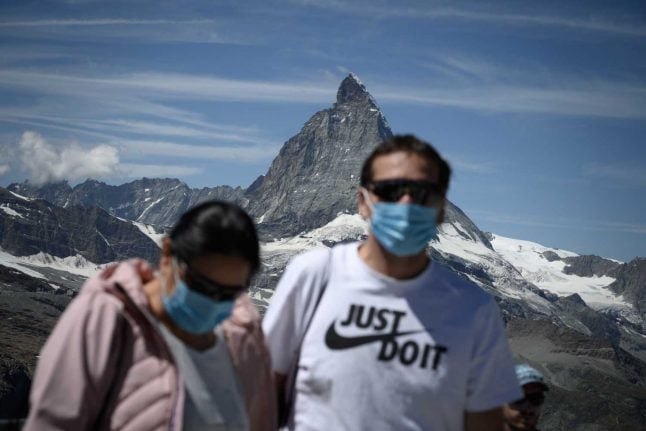 More than 80 percent of those who responded said the mask requirement should be extended.

The poll drew the biggest response in the history of The Local Switzerland, with 142 respondents along with dozens more on social media.

The vast majority of respondents supported the mask requirements as they stand, while a majority asked that they be extended.

Do you support the mask requirement – and should it be extended?

Just under nine in ten respondents were fans of the mask requirement in public transport (85.9 percent).

Reader Joelle Fellhauer said she supported the mask rule due to the need to protect the most vulnerable.

“Absolutely YES. We’re all part of a community and if this small Inconvenience is what it takes to protect people, specially the weakest, then we should do it…& the government should make it mandatory when more selfish members of the community are being short-sighted and put others at risk.”

The support was similarly strong for extending the mask requirement to shops and supermarkets, with 80.1 percent of people in favour.

The support declined somewhat for compulsory masks in food and drink service, but 71 percent of respondents still said they were in favour.

When asked where else masks should be made compulsory, the answers varied greatly.

Plenty of respondents told us that masks should not be made compulsory anywhere else, while some said they felt a mask should be worn at all times when leaving your house.

Some created their own science around masks to tell us that they were ineffective or harmful, but by and large most of the respondents were sensible and informed when it came to mask wearing.

Are people following the rules?

Almost four fifths of people felt that the mask requirement was being complied with on public transport, with only 21.1 percent of respondents disagreeing.

Evie McQuire joined the chorus of many of our respondents who said fines should be increased for failure to wear masks, citing an example of disobedience in the tram.

“Must be mandatory of wearing a mask for the safety of everyone and they should have a fine for not wearing a mask …so that (a) hardheaded person will learn from it…and for everyones safety..”

“Definitely- and they need to fine those not complying. Have seen some wearing none, and a couple who held the mask in their hand and only put it on when they say the conductor coming!”

Who follows the rules the best?

Before the masks requirement came into place, several of our foreign readers complained that they were the only ones complying.

But since the mask has been made mandatory, it appears that both internationals and locals are complying with the rules.

When asked if “expats and internationals were complying more than Swiss nationals” the majority said they were unsure (65.5 percent), compared with almost one in five who thought that Internationals followed the rules more often.

The remainder – 14.8 percent – felt that locals complied better than foreigners.

One respondents said there was a stark difference between Swiss locals and foreigners.

“In shops and other public places, it’s clearly visible that foreigners wear masks while the Swiss do not. Furthermore, every expat I know has said they will not go out without a mask, where as every Swiss person I know pretty much ignores it.”

READ: One in ten passengers abused for wearing masks

Plenty of our readers had strong feelings on who was complying. One said that the Swiss were “arrogant villagers” who don’t use common sense.

“The Swiss feel above everything, arrogant villagers, that only follow whatever is convenient. Non-Swiss use common sense, irrespective of the regulations or subjective beliefs”.

Another said foreigners were motivated by fear to stick to the rules: “non-citizens fear reprisals from the government”.

Another reader drew parallels with wearing masks and the elusive notion of ‘freedom’: “I never hear expats complain about (masks). While Swiss people talk about getting freedom taken away.”