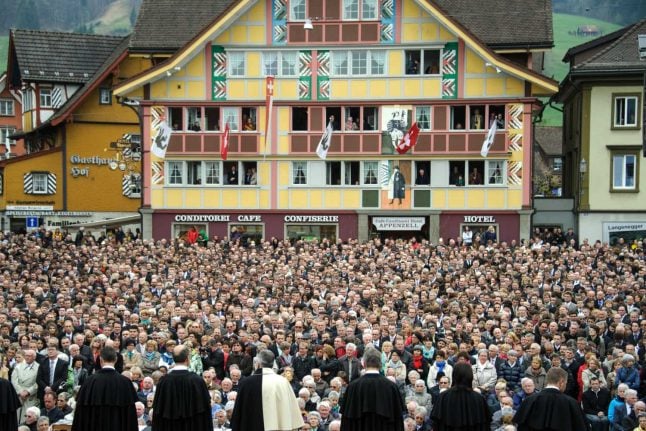 People gather in a square to vote during the annual Landsgemeinde meeting in the town of Appenzell, eastern Switzerland. Photo: SEBASTIEN BOZON / AFP

The Landsgemeinde (open-air assembly), in operation in the cantons of Glarus and Appenzell Innerhoden, is the oldest form of democracy practiced in Switzerland.

While the event in Appenzell Innerhoden was cancelled in April, authorities in Glarus were hoping theirs would be allowed to take place.

Authorities in Glarus announced on Tuesday that the vote would be cancelled, with decisions instead made by cantonal parliament.

The remaining decisions will be pushed to the 2021 event.

It will be the first time since the foundation of Switzerland in 1848 that the event won’t take place.

While it has occasionally been postponed due to bad weather, this is the first time it has been cancelled.

The Landsgemeinde was held annually during both world wars.

‘Direct democracy in its loveliest form’

In a previous article on the Landsgemeinde in Appenzell Innerhoden, The Local Switzerland profiled local man Steffan Millius as he attended a Landsgemeinde.

Steffan Millius grips his sword and makes his way through the throngs of people crowding into Appenzell’s central square to take part in Switzerland’s famous direct democracy in perhaps its purest form.

“I think it’s the best way to live democracy, because it’s really direct,” he says, straightening his sword, which he, like most of the other men, carries instead of a voting card.

The tradition of the Landsgemeinde, or open-air assembly, dates back to the 14th century, and in Appenzell is held every year on the last Sunday in April.

Historians say that back then, only men willing to go to battle to defend their community were allowed to vote — a right they for centuries have demonstrated by carrying a side-arm into the voting ring.

“This is the only place in the world, I think, where a weapon serves as voter ID,” says Rudolf Keller, the second secretary in the Appenzell cantonal government, showing off his own sword, which has his name engraved in the glistening steel.

Only Appenzell Innerhoden and another canton, Glarus, vote this way.

The women flocking through Appenzell’s narrow and windblown streets meanwhile carry their yellow voting cards with as much pride as the men carry their swords.