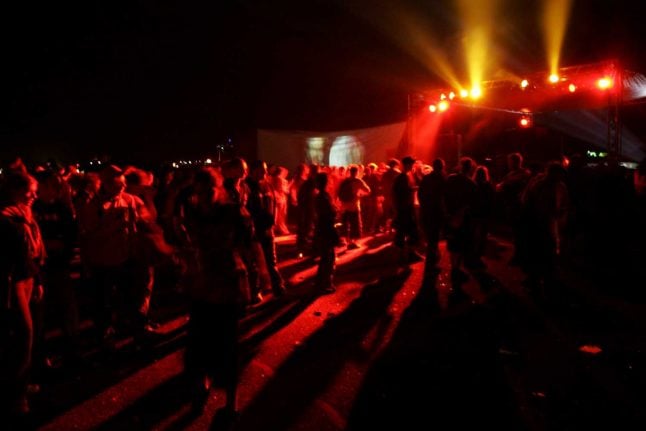 A file photo of a rave in France. Image: JEAN-CHRISTOPHE VERHAEGEN / AFP

On Saturday evening, police were called in to break up an illegal rave with hundreds of attendees in Bern.

Experts have warned that the problem is likely to accelerate during the winter, according to Swiss news site 20 Minutes.

Alex Flach, spokesman for the club scene in German-speaking Switzerland, said that lockdown restrictions and knowledge of the danger of the virus would not quench people’s appetite to party.

“One thing is clear, however: the people's need for partying and exuberance does not go away when the clubs are closed,” Flach told 20 Minutes.

“In the summer it went relatively well, people went into nature and celebrated in the forest,” says Flach. In winter, this will no longer be possible, warns Flach.

“Illegal parties in apartments or basements in the city will increase massively.”

The rules for nightclubs vary significantly in Switzerland. In some of the hardest hit cantons have put in place maximum numbers of attendees, while in Geneva nightclubs are closed until November at the earliest.

‘In winter, the police will feel that the clubs are closed’

Nightlife advocates argued that restrictions on nightclubs should be lifted as they were better placed to ensure coronavirus measures were adhered to, such as contact tracing.

“The clubs provide a framework in which to celebrate. Illegal parties, on the other hand, offer much more potential for conflict, for example with neighbours.”

Flach fears that complaints about noise or waste will increase in winter. “The police will feel that the clubs are closed in winter”.

Max Reichen, President of the Bern Bar and Club Commission, said not only were clubs better placed for contact tracing than illegal parties, but they were also better placed than public transport or supermarkets – two other potential infection sites.

“Let's assume that an illegal party with 200 people in takes place on a farm in the country. If someone who has contracted the virus dances there, it will be extremely difficult to locate all 200 participants and, if necessary, to quarantine them. “

“So it would make more sense for us if the clubs could offer a program within an appropriate framework and guarantee seamless contact tracing so that we can react quickly in the event of an infection.”

Bern’s cantonal security director Reto Nause said the clubs should be involved in an eventual solution.

“There have always been illegal raves in the city of Bern. Participating in such events always carries a risk. We advise against it,” Nause said.

“We lend a hand where we can. If the appropriate protection concepts are adhered to, we would try to make raves possible too.”