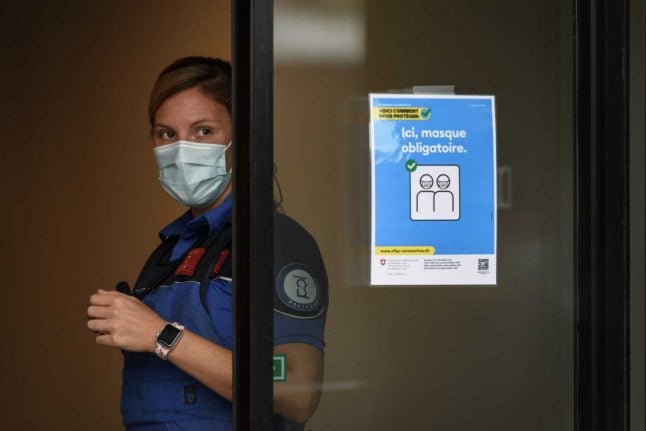 A policewoman wearing a protective face mask guards the entrance of the court of Canton of Vaud. Photo: FABRICE COFFRINI / AFP

The Swiss government is set to meet on Wednesday to discuss implementing a range of new lockdown measures.

From expanding mask requirements to severe restrictions on groups and events, the lockdown rules are reminiscent of those adopted during the first wave of the virus in the spring.

According to Swiss media, the measures are to be communicated to the cantons at a meeting on Wednesday, October 28th.

READ: What to expect from the Swiss government's lockdown meeting on Wednesday

In a press conference on Tuesday, representatives from the Federal Office of Public Health, the Coordinated Medical Service, the National COVID-19 Science Task Force along with cantonal and federal health authorities suggested that not only would another lockdown be an inevitability – but it was a necessity.

Rising infections – along with hospitalisations and deaths

On Tuesday October 27th, the Federal Office of Public Health (FOPH) detected a total of 5,949 new cases over the past 24 hours.

There were sixteen deaths and 167 hospital admissions nationwide.

The new numbers came from 20,709 tests – meaning there was a 28.7 percent test positivity rate – a major concern for Swiss authorities.

Martin Ackermann, President of the National COVID-19 Science Task Force, told the press conference “we have no time to lose”.

“We have more hospitalisations and more deaths than we had in March. But we aren’t reacting in the same way,” he said.

“The movement data shows that we are not reducing our mobility enough.”

As reported in The Local on Monday, Swiss hospitals are fast running out of capacity – particularly in intensive care departments.

Ackermann told the press conference that even though efforts were being made to expand the country’s capacity of hospital beds, only reducing the number of new infections would see hospital capacity preserved.

“If we can increase the number of places in intensive care units by 200, we would only gain 32 hours,” he said.

“There are currently no alternatives to drastic measures.

“Stay at home whenever possible.”

Of the 22,183 acute beds remaining in Switzerland, 16,328 are currently occupied. A total of 1,071 beds are available in intensive care units across the country, 725 of which are occupied. Therefore, there are still 346 intensive beds available, reports 20 Minutes.

‘Mini-lockdown may not be feasible in practice’

One idea which has been floated in Switzerland is to adopt a so-called ‘mini-lockdown’.

The measure is seen as a way to prevent an even larger lockdown in the future. Pursuant to the lockdown, public life would be restricted by a short period of time to cut rising case rates.

Ireland, Israel, Wales and Scotland have each imposed some form of ‘mini-lockdown' to cut rising coronavirus infections.

Boris Zürcher from SECO said that although the idea has some merit, there are difficulties and disadvantages – particularly as no country has successfully completed one yet.

“We haven't had (completed) a mini lockdown yet. That might be feasible in theory, but not that easy in practice,” he said.

“There is a risk of a yo-yo effect”, Zürcher said.

“It's about slowing down activities, not stopping them completely. Switching off and then going on again is not as easy as it sounds.”