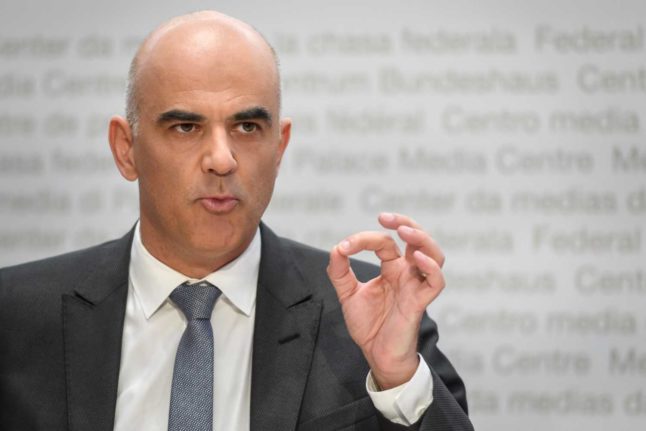 At a meeting with cantonal authorities on Wednesday, October 28th, Switzerland announced a range of new restrictions measures to halt the spread of the coronavirus.

Sommaruga explained that the measures must be implemented at a federal level, rather than by individual cantons.

“What unites us is stronger than what divides us, we want Switzerland to overcome this crisis unanimously,” she said.

The measures include a nationwide curfew on bars and restaurants.

Please click the following link for information on the measures.

When do the restrictions start and end?

The measures were effective at midnight on Thursday, October 29th. The only exception is the distance learning requirements at universities, which come into effect on Monday, November 2nd.

As yet, no end date has been put on the measures.

Berset said it was important to cut the chains of infection and to avoid a “yoyo effect”.

Berset said the goal of the new measures was to avoid overloading the hospital system.

Cantons have also suggested that the measures can be safely ended when contact tracing is again allowed.

How does this compare with the measures from the spring?

The measures adopted are less severe than those implemented in the spring.

While groups were restricted to five, they are now allowed to be as large as 10.

Similarly, while bars and restaurants were forced to close completely, they may now remain open within a set time frame.

The major difference between the spring and autumn lockdowns however has been the mask requirement.

Masks were not made law in Switzerland until July 6th – and even then this was only on public transport.

Conversely, the current rules regarding masks – including requiring masks outside in built-up areas – are among the strictest in Europe.

Will the restrictions be effective in stopping the spread?

At this stage it is difficult to determine – with the measures' impact on infection, hospitalisation and fatality data only becoming available in the coming weeks.

While some have criticised the measures for being insufficient – they remain less significant than most of Switzerland's neighbours – a number of MPs and health experts interviewed in the Swiss media praised the government’s “proportionate and pragmatic” approach.

According to MP Marianne Maret, Switzerland should not necessarily follow the example of other nations.

“In the spring, these countries implemented total lockdowns, while Switzerland opted for semi-confinement. We came out of this situation just as well as they did, but with less damage to our economy,” she said in an interview on RTS public television.

Another deputy, Jacqueline de Quattro, said on the same programme that “not all Swiss cantons have the same high infection rates as Geneva, Vaud and Valais. In the regions where the rates are lower, the new measures may even seem too drastic”.

For the infectiologist Andreas Cerny, “the measures will certainly lead to the infection curve flattening out”, he said in an interview with 20 Minuten news portal.

“We learned from the spring lockdown that closures have probably done more harm than good,” he added. “The new measures won’t restrict our lives too much.”

Verny also pointed out that the Federal Council’s measures are ground rules, “and each individual canton can build on them. The cantons which are severely affected by the wave of infections must tighten their measures further”.

While the semi-confinement is the spring was relaxed after six weeks, “it won't be that fast this time around”, Verny predicted.

“Because the measures adopted are less drastic, they are likely to be retained for longer. The current restrictions will probably stay with us until spring”, he added.

What is the next step if the measures don't work?

The Swiss government said the most important metric in determining the effectiveness of the measures was to look at hospitalisation rates.

Switzerland is already experiencing a significant uptick in hospitalisations, with several cantons worried about dwindling beds.

Berset said it was up to all residents of Switzerland to prevent a more extreme set of measures being implemented.

Berset told the press conference “The next step would have big, big consequences. This is now the last chance to prevent a lockdown.”

The quarantine rules were changed. Can I still travel? Do I still need to quarantine?

Switzerland on Wednesday amended its quarantine rules. Now, only four countries – and regions of another – are considered ‘high risk’ areas requiring a quarantine.

According to Switzerland’s new quarantine rules, only Belgium, the Czech Republic, Andorra and Armenia – along with three regions of France, including Paris – are considered high risk.

In France, the Hauts-de-France and ÎIe de France / Paris regions as well as the overseas territory of French Polynesia are considered to be risk zones.

The announcement is a significant change from the country’s previous quarantine rules, where dozens of countries and regions of countries were considered to be high risk.

The duration of the quarantine will however remain at ten days.

The federal government said the “radical” change of course was due to rising infection rates all across the world.