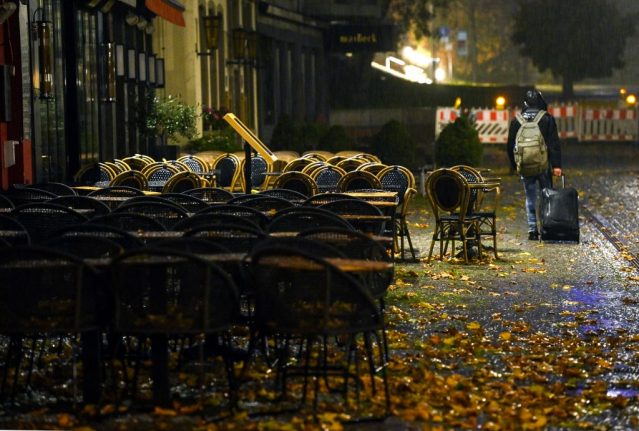 Geneva shut its bars and restaurants to turn the spread of Covid. Photo by AFP

The French-speaking canton of Geneva has been among the heaviest-hit Swiss regions during the first wave of the Covid-19 pandemic in the spring and continues to deal with the skyrocketing rates of infection.

With nearly 2,800 cases per 100,000 inhabitants in the past 14 days, Geneva has Europe’s highest number of contaminations per capita, according to a report by RTS public broadcaster, which based its findings on data compiled by the World Health Organization.

Its alarmingly high infection rate has prompted cantonal authorities to rush through a raft of restrictions on November 2nd, which are among Switzerland’s tightest.

Hospital patient numbers in Switzerland continue to rise with the latest reports saying there were 608 Covid-19 patients in Geneva's hospitals. Pressure has grown on intensive care units with a small number of patients transferred to hospitals in Bern and Zurich to ease the burden.

Why is the number of contaminations so high in Switzerland’s western most canton?

Even the experts say it is not easy to determine the exact cause of the outbreaks.

“There is no explanation, not enough data on the origin of the recent clusters” that have been spreading through the canton, Antoine Flahault, director of the Institute of Global Health at the University of Geneva said in an interview.

However, Geneva’s unique convergence of several factors may explain some of the reasons:

In many parts of Geneva and its suburbs, people live in close proximity to each other.

For example, RTS public broadcaster reported that “in the heart of Geneva, 29,952 people live on the densest square kilometre in Switzerland. This is more than the average density of Manhattan or that of most districts of Paris”.

Epidemiologists say that when that many people are packed tightly into urban clusters, they interact often and have more opportunities to spread disease.

The canton borders French départements of Haute-Savoie and Ain, two areas that are particularly affected by the pandemic.

Some 125,000 frontier workers commute daily to their jobs in the Lake Geneva area from the two affected French departments, so the cross-border spread remains a real possibility.

Especially since “when positive cases are found in France, it is impossible to conduct contact tracing in Geneva, because we are not informed,” said State Councilor Mauro Poggia.

Geneva is home to a number of United Nations and other international organisations.

Their members travel extensively, hold meetings, and come in contact with many people, both locally and abroad.

According to one media report, “at least 34 COVID cases have been found among U.N. staff since mid-October”.