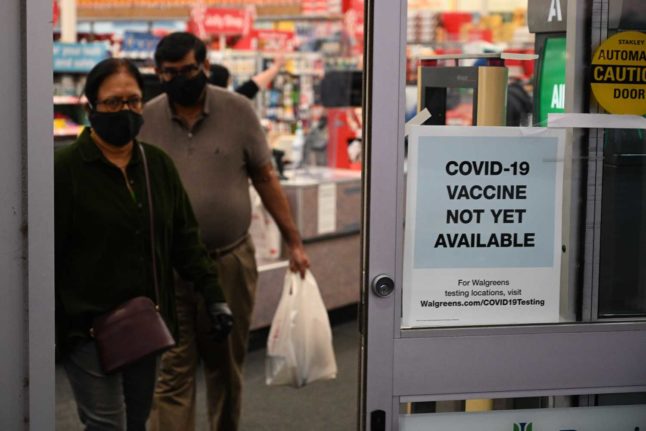 A sign on a pharmacy in the United States tells customers that the Covid-19 vaccine is not yet available. Photo: Robyn Beck / AFP

With three coronavirus vaccines now entering the final research stages and showing high degrees of effectiveness, countries across the world have begun to set up their infrastructure to rollout a nationwide vaccination program.

When will the vaccine be available in Switzerland and internationally?

In the United States, the United Kingdom and Germany, vaccinations are expected to start to take place in December.

The head of the US vaccination program said on Sunday that vaccination centres would be set up by December 11th, while authorities in Germany and England have given mid-December as the date of the planned rollout.

In Switzerland however, the first vaccinations are not expected until the spring. The prediction comes from Swiss medical authority SwissMedic and has been widely reported in the Swiss media.

Switzerland is rich so why do we have to wait so long?

That Switzerland will need to wait longer than its neighbours has little to do with wealth and more to do with the way the country’s medical approval system has been established.

As reported by Watson on Tuesday, “with regard to corona vaccination, nothing works in Switzerland without the Swissmedic drug control (process). It decides when a vaccine comes onto the market.”

As a result “an approval in December is unlikely. But it should be ready by spring.”

What does Switzerland need to do to approve the drug?

Firstly, Swissmedic will take into account all the documentation and results from the existing clinical trials which have taken place up until this point.

Once this information has been received and studied, an initial decision regarding authorising the vaccine or vaccines can be made.

READ MORE: How Switzerland plans to roll out the coronavirus vaccine

“We hope to receive more meaningful data from approval studies at the beginning of 2021 and are preparing to be able to make a decision quickly,” Swissmedic spokesman Lukas Jaggi told Watson.

Does size matter in the approval process?

While the US, the UK and Germany are much larger, evidence from Switzerland’s neighbours shows that size is not a major factor.

Austria said on Tuesday, November 24th that it expected the vaccine rollout to start in the first week of January 2021.

The most crucial factor is the time it takes for the vaccine manufacturer to deliver the relevant information to Swiss authorities, according to Swissmedic.

Given that most governments are likely to receive the information at the same time, it would suggest that it is the approval process rather than the tardiness of the pharmaceutical companies which will delay the vaccinations.

“There are still too many questions unanswered,” Jaggi said.

Why does approval take so long?

Switzerland, through Swissmedic, has some of the world’s highest standards and strictest test approval processes, reports Watson, particularly in comparison with the United States

“In the USA, there are comparatively low hurdles for emergency approval,” writes Adrian Müller.

“Put simply, it must be ensured that a drug or vaccine demonstrably helps more than it does harm.

“In the emergency procedure, the vaccinated people – to put it bluntly – become extended study participants or even guinea pigs.

While those in risk groups are expected to be vaccinated first, Swiss medical procedure requires specific data to be obtained about the impact of the vaccine on risk groups before vaccination can begin.

“Older and risk groups are usually only included in a second step of the approval studies,” Jaggi said.

This information will therefore only be available later, delaying the rollout of the vaccine.