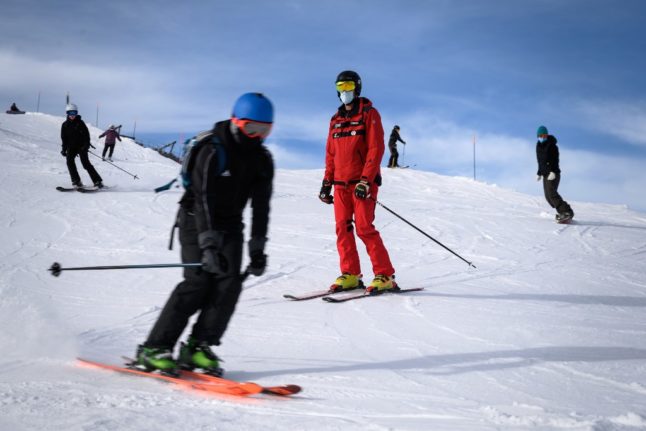 Les Portes du Soleil will limit the number of skiers on its slopes. Photo by AFP

Les Portes du Soleil in canton Valais, one of Switzerland's biggest ski resorts, announced that from Friday it would set a quota on the number of skiers allowed on its slopes in a bid to rein in the spread of Covid-19.

It is the first Swiss resort to impose a limit on the number of skiers. The measure is aimed at preventing unmanageable queues forming at the bottom of the slopes, as was the case recently at another Valais resort, Verbier, where a large, unorganised crowd swarmed around the entrance to a ski lift.

Covid-19 – What are the rules for skiing in Switzerland this winter?

“As the holidays approach, we want to guarantee the best possible experience for our customers and avoid as much as possible the area being saturated”, Enrique Caballero, spokesperson for Les Portes du Soleil told RTS public broadcaster.

The ski domain, which shares its slopes with France, made news at the end of November, when it announced that it would put in place a shuttle bus to pick up French skiers at nearby resorts in France and bring them to Switzerland.

But the plan was scrapped when French president Emmanuel Macron said that residents of France heading abroad to ski would have to self-isolate for seven days on return and that border checks would be stepped up in certain areas.

Meanwhile, the canton of Zurich is urging all Swiss ski areas to close.

The reason for this drastic step is a concern that medical facilities, which are already near their full capacity, will not be able to take in additional patients.

“The hospitals in Zurich are hardly in a position to care for accident victims from the ski areas ”.

While the Zurich area itself has only limited ski possibilities, the worry is that people coming back to the canton with ski injuries sustained elsewhere will overcrowd its already strained health system.

This is based on a suggestion made by authorities in Graubünden that injured skiers should be treated in their cantons of residence and not where they had the accident.

But Zurich’s call is not garnering much support in this ski-loving nation.

“It’s not right that the cantons that have not done anything in the past few weeks are now pointing their fingers at us and turning skiing into a big problem”, said Christophe Darbellay, president of Valais’ Council of State, referring to the lack of strict anti-coronavirus measures throughout most of Swiss-German cantons at the beginning of the second wave.

“For now we will keep our ski areas open and also open those that have not yet started operations”, Darbellay added.

Skiing infrastructure is operating under strict conditions put into place by the Swiss Ski Lift Association as well as public health officials.

For instance, masks are mandatory not only in closed spaces such as mountain trains and cable cars, but also on open-air chair lifts and T-bars, as well as in queues.

In addition, queuing is regulated so it runs in an orderly manner and without major clusters.