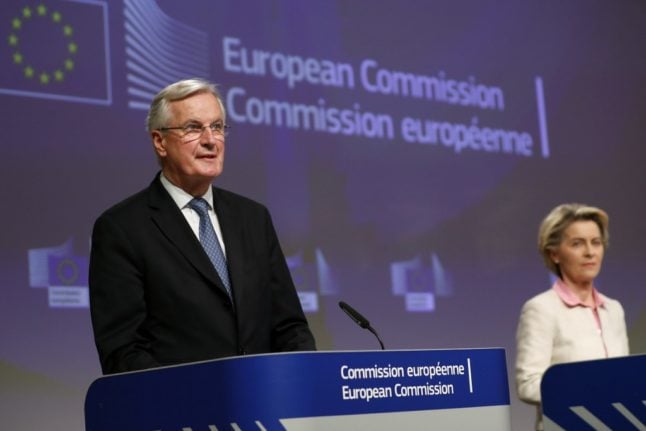 “It was worth fighting for this deal. We now have a fair & balanced agreement with the UK. It will protect our EU interests, ensure fair competition & provide predictability for our fishing communities,” said European Commission chief Ursula von der Leyen.

She also said: “Europe is moving on”

Chief EU negotiator Michel Barnier warned “this agreement will require efforts”, and notably pledged support to EU fishermen and women after fishing proved the toughest of issues to resolve.

Irish Prime Minister Micheal Martin said the deal “represents a good compromise and a balanced outcome” which will avoid a hard border on the border with Northern Ireland, stressing “the UK will always be a close friend and partner”.

“Europe's unity and firmness paid off,” tweeted President Macron, adding “the agreement with the United Kingdom is essential to protect our citizens, our fishermen, our producers” and concluding that “Europe is progressing, and
can look to the future, united, sovereign and strong”.

German Chancellor Angela Merkel said she was “confident” the deal represents a “good outcome” that Germany would be able to support.

Spanish Prime Minister Pedro Sanchez tweeted “the principle of an agreement between the EU and the United Kingdom is welcome”, while adding that Madrid and London must continue talking on the status of Gibraltar.

“I warmly welcome the reaching of an agreement with the United Kingdom,” Portuguese Prime Minister Antonio Costa tweeted, underlining that the UK will remain an important partner and ally.

“Good news: deal between the EU and the UK has been agreed,” tweeted Italian Prime Minister Giuseppe Conte. “Interests and rights of European businesses and citizens guaranteed. The UK will be a central partner and ally for the EU and Italy.”

“I welcome that an agreement could be reached by the negotiators on the EU's future relationship with the UK. We will now carefully examine the agreement,” tweeted Chancellor Sebastian Kurz.

“Draft agreement is the best Christmas gift EU27 & UK can give each other,” tweeted Foreign Minister Jeppe Kofod.