How Swiss text sleuths have unpicked mystery of QAnon origins

The mysterious "Q" behind the QAnon conspiracy movement, which was instrumental in the storming of the US Capitol, is in fact two people, according to Swiss experts.

"There are clearly two styles characterising the QAnon messages," company chief Claude Alain Roten told AFP in an interview at his home in western Switzerland.

The conspiracy movement is based on messages by "Q Clearance Patriot", who claims to be a US intelligence official leaking classified information.

READ MORE: How did a fringe conspiracy theory grow to be a nationwide movement in Germany?

The so-called Q-drops began appearing on fringe messaging board 4chan in October 2017 and later moved to 8kun, promoting a vast conspiracy theory claiming President Donald Trump is waging a secret war against a global liberal cult of Satan-worshipping paedophiles.

There has been speculation about Q's identity and whether one person is really behind thousands of these Q-drops but Roten said it was now clear "two people are behind them".

The 60-year-old asked AFP not to divulge the location of the house, which serves as a meeting place for the dozen or so employees currently all working from home, over concern about the reaction to the firm's analysis.

The company does so-called sequential stylometric analysis, which statistically analyses character sequences, comparing the frequency of single letters, letter pairs or triplets to determine the author or authors of a text.

They use the technique to uncover academic plagiarism, ghostwriters or, for instance, to determine whether portions of a will or a contract may have been tampered with.

But Roten, who spent three years in the United States, said he had grown increasingly concerned over QAnon's "population manipulation" there, and had decided to apply his software on the movement without being paid.

A biologist by training, Roten switched fields after realising the same principles used to identify genetic codes could help spot the singular characteristics of a person's writing style.

"I feel like I am still in the same profession," he said. 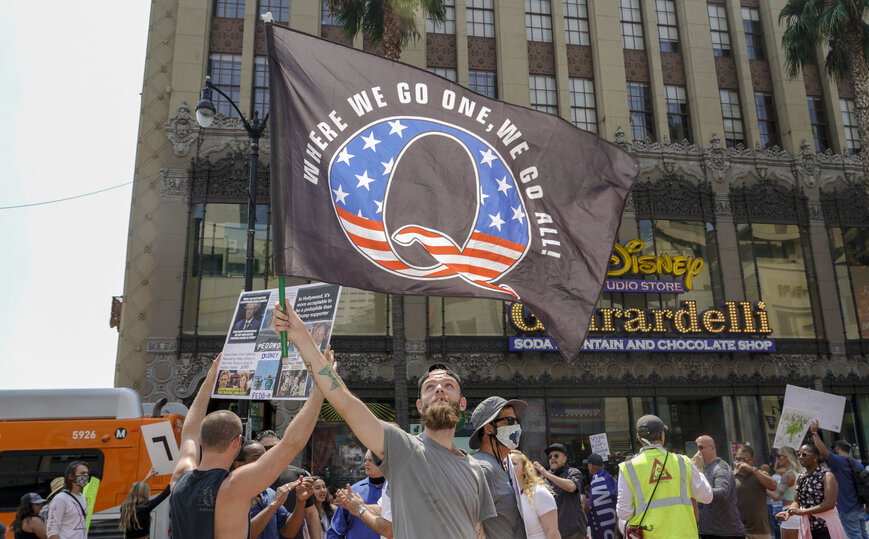 A Qanon rally in the US. Photo: AFP

His colleague, a lanky 63-year-old with grey hair and a fabric facemask who asked to be identified only as Rene, showed off the software on a laptop perched on Roten's dining room table.

After "cleaning" 4,950 Q-drops of irrelevant content like web links and greetings, he feeds them into the software.

He said the chart showed a clear difference in style between the first Q messages that appeared on 4chan, from October 28 to December 1, 2017, and the subsequent messages.

Stylometry has been around for more than a century, but the advent of computers has dramatically boosted the capacity to analyse large quantities of data.

OrphAnalytics has made a number of headlines since its founding in 2014, having put its software to sometimes surprising use.

It helped sniff out the likely author behind the beloved Elena Ferrante pseudonym, comparing her writing to samples from two Italian authors suspected of being behind her books, discovering, Roten said, that "Domenico Starnone writes in a style that is indistinguishable from Elena Ferrante".

And it has reportedly been engaged as an expert witness in criminal cases, including the unsolved 1986 murder of four-year-old Gregory Villemin in France.

Roten refused to say whether his company was working on that case, or comment on any of the handful of judicial cases it has been asked to weigh in on, saying such comments could taint a case.

He said the company's approach of focusing purely on statistical analysis, and stripping away all the context and hypotheses generally used to enrich text analysis, helped avoid allowing preconceptions colour the outcome.

"It is difficult to imagine anything more neutral than this," he said.

Cafiero agreed the novel adaption of the technique to the judicial process could help "avoid making mistakes".

But he voiced concerns about "risks" linked to broadening the application of an increasingly powerful technology, such as potentially helping to identify whistleblowers.

"With any technology, there is light and there is a dark side," Roten acknowledged, stressing that his company had strict ethical guidelines to "avoid our stylometric sequencing approach being used to serve the dark side".

As for the QAnon probe, he said he felt an obligation to help illuminate who was behind the curtain.

"We are responsible people. If we can act, we act."