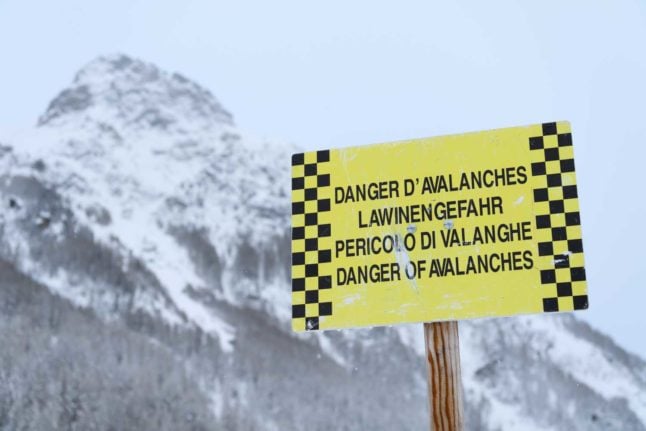 Avalanche warning boards are on display at a closed area in the small resort of Zinal, Swiss Alps in 2018. Photo: FABRICE COFFRINI / AFP

As of Tuesday afternoon, January 19th, 14 people have died as a result of avalanche accidents in Switzerland, including six over the past weekend alone.

This is well above the average yearly figure of eight people.

The number also is higher than the fatality count from any winter over the past two decades, other than 2014-15 where 18 people died as a result of avalanches.

On Monday, a 29-year-old Irishman who lived in Valais died, along with a 38-year-old British man in Verbier in separate incidents.

The Irish man was involved in an accident near Siviez and was later airlifted to Sion, where he succumbed to his injuries.

On Sunday, 19-year-old Swiss died after an accident near Rochers de Naye.

Three people died on Saturday in three separate avalanches in the cantons of Graubünden, Obwalden and Schwyz.

Is coronavirus to blame?

The pandemic has cut mobility and brought tourism almost to a standstill, but some experts have argued that lockdowns and other coronavirus measures have contributed to the higher than usual death rate.

As reported in Switzerland’s Neue Zürcher Zeitung, the one commonality between all of the fatal accidents is that they happened ‘off piste’, i.e. not on the secured slopes where the vast majority of skiers ski.

With many concerned about the potential for contracting the virus – and with ski resorts experiencing record popularity – the idea of going off piste has become more attractive.

But with Switzerland experiencing significant snowfall in recent weeks, the risk of avalanches has grown.

On Saturday, January 16th, the SLF Avalanche Bulletin carried the warning of a “very dangerous avalanche situation away from secured slopes”.

The SLF Avalanche Bulletin can be found here.

The central and eastern Alps had an avalanche warning of four, which includes a caution that “individual winter sports enthusiasts could very easily trigger avalanches”, reports the NZZ.

“The particularly dangerous conditions of this winter, with relatively little snow at the beginning and now extreme amounts of precipitation in some areas within a short period of time partially explain the sad result.”

Pierre Mathey, Managing Director of the Swiss Mountain Guide Association, said the lockdown also contributed to the fatality risk due to cabin fever.

With people feeling more “locked in”, Mathey said they are more likely to want to go outdoors whenever it is allowed.

Mathey also said that the avalanche warnings probably fell on deaf ears due largely to the bombardment of warnings and rules most people have experienced since the pandemic first broke out in March.

“Unfortunately, you must assume that the warnings appear a little duller,” he told the NZZ.

Would closing the slopes stop the deaths?

While the coronavirus pandemic may be partially to blame for the higher than average fatality rates, experts have warned that simply closing the slopes is unlikely to make a difference.

In fact, it could lead to a higher than average fatality rate, with people more likely to go off piste.

Mathey said closing the slopes would force skiers to go into “open nature”.

“It (closing the slopes) would be a programmed catastrophe,” Mathey said.