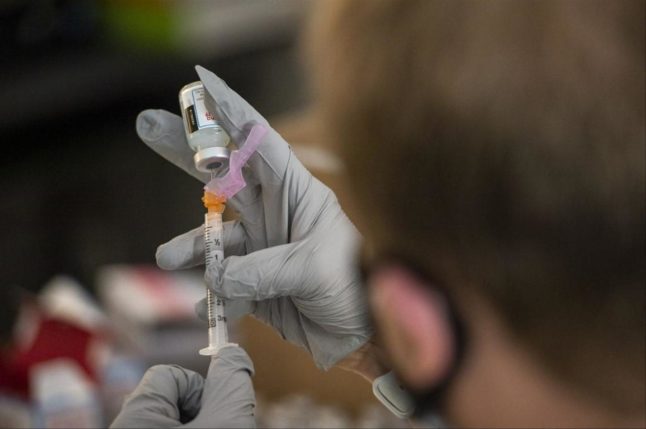 It's not yer sure what benefits vaccinated people will receive. Photo by AFP

As at least 10 percent of Switzerland’s population has already been vaccinated — and more inoculations are taking place every day — the question of special perks for those who have had their shots is a pertinent one.

The idea has already gained favour in other countries such as Israel, which has had one of the world's most aggressive vaccination efforts.

But in Switzerland, the answer depends on where you live — and some other factors too.

Graubünden is the first — and so far the only — canton that has implemented a programme of giving privileges to vaccinated residents.

For instance, anyone who has received both doses of the vaccine, along with anyone who has contracted the virus in the past three months and has recovered, may be allowed to avoid the quarantine requirements.

No other canton to date had introduced a similar exemption, but the topic raises both practical and ethical issues, and is likely to become even more relevant as increasing numbers of people get vaccinated.

This issue is also debated on the federal level.

The Health Ministry has put this question to the Federal Council this week — what, if any, benefits can be granted to those who are inoculated? Should vaccinated people be exempted from the quarantine and other Covid-19 restrictions? Should restaurants be allowed to advertise that only those who have been vaccinated are allowed inside?

The government will seek the opinion of the National Ethics Committee in Human Medicine (CNE), according to Switzerland's Neue Zurcher Zeitung newspaper.

“In general, the CNE believes that inequalities in treatment favouring vaccinated people could only be justified if the vaccination also protects against the transmission of the virus and if all people wishing to be vaccinated have access to it”, the committee said on its website.

The CNE added that “it may be justified, under appropriate conditions, to lift certain restrictions for vaccinated people and to require a vaccination certificate for certain activities of daily living”.

The ethics committee also makes a distinction between several situations. It considers that lifting the quarantine requirement and the limit on the number of people allowed to gather together is justifiable for the vaccinated.

It is also legitimate for airlines to request proof of vaccination, especially since it is difficult to ensure a “sufficiently safe environment for all travellers” on long flights, CNE noted.

Bern is already working on a regulation concerning these “advantages” offered to vaccinated people, as confirmed by Ingrid Ryser, spokesperson for the Federal Office of Justice.

“This the subject of intensive discussions within the federal administration”, she said.
An initial analysis of the legal situation was carried out before Christmas, and discussions are now underway with the federal data protection officials.

While legal implications of such a move are being examined, on the economical political level opinions vary.

Economiesuisse, an association of business groups, said that the state should no longer impose restrictions on the economic and personal freedoms of vaccinated people. For instance, major events such as sports or rock concerts would be permitted again, but only for those who have coronavirus immunity.

The rightwing Swiss People’s Party rejects “state discrimination” against unvaccinated people, especially as long as there is not enough vaccine available for everyone.

“Privileges for vaccinated people would also mean compulsory vaccination through the back door,” according to party president Marco Chiesa.

He also pointed out that privileging only inoculated people would be discriminatory against those who have already contracted Covid and have developed immunity.

Chiesa added that it is acceptable for private businesses to provide certain benefits to vaccinated individuals.

However, such special treatment can’t be offered by state-funded establishments.

Interestingly, a survey carried out by Tamedia newspapers at the end of November 2020 showed that majority of SVP supporters did not want to be vaccinated.

The trend is opposite within the Green Party, where the majority said to be pro-vaccine.