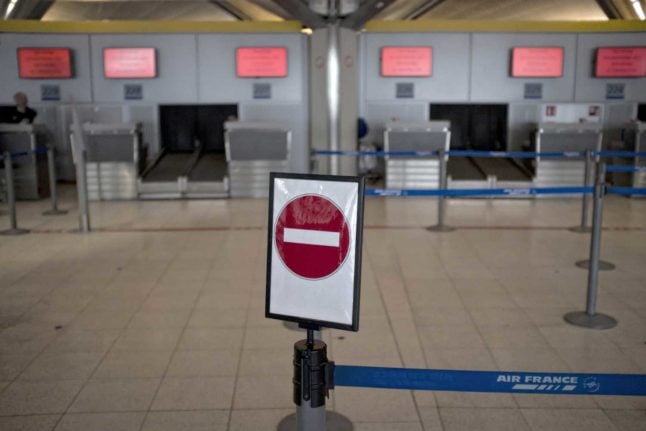 A sign says 'no entry' at an airport. Photo: JEAN-PHILIPPE KSIAZEK / AFP

As reported by several Swiss media sources on Wednesday, travellers’ negative coronavirus tests were not checked, while others had made use of a loophole which allows them to fly to Switzerland without a negative test if it was too difficult to get tested.

Currently, Swiss travellers are required to show a negative test to airlines to airline staff when boarding a flight to Switzerland, as well as when they land.

People arriving in several Swiss airports told the NZZ newspaper and Swiss tabloid Blick that they had not had their tests checked either when boarding or upon landing – or in some cases both.

While tests are checked upon landing only on a random basis, all those boarding flights to Switzerland are required to have their tests checked by airline staff.

According to Blick, travellers on Swiss airlines and Edelweiss said they did not have their tests checked by airline staff despite having them at the ready.

A spokesperson for the airlines told Swiss media that this was not policy and represented “isolated cases”.

According to Blick, there were “dozens of cases” of people flying into the country unchecked.

Swiss government has not closed the ‘no test’ loophole

Another problem identified in Swiss media is the so-called ‘no test’ loophole.

Pursuant to this loophole, anyone arriving in Switzerland via plane is able to avoid having to show evidence of a negative test if they declare it was too difficult to do so.

The Federal Office of Public Health website has a form for travellers to fill out if they were unable to get tested “within a useful period of time or with reasonable effort”.

However, passengers do not need to prove this, with Swiss media reporting on a number of cases of arrivals filling out this form if they simply did not want to get tested.

As the NZZ writes:

“Word has got around among clever guys that you can save yourself the expensive PCR tests before returning home. The probability of being checked in Switzerland is low. And if it happens anyway, there is no fine if you have completed the self-declaration – you simply have to do a cheap quick test at your place of residence.”

There are no consequences for filling out this form dishonestly.

Moreover, while anyone who fills in the form must promise to get tested “as soon as possible” upon returning to Switzerland, there are no controls in place in case the person does not get tested.

Several travellers told Blick they felt the system rewarded people who were dishonest, with those trying to stick to the rules were punished.