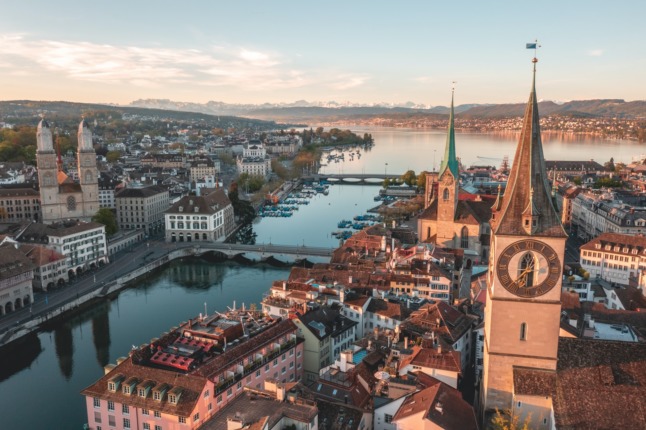 Zurich is the most appealing city to Google users in Switzerland, Photo by Henrique Ferreira on Unsplash

Referring to the 2G rule expected to be implemented in Switzerland this week, Guy Parmelin conceded the measure “is very drastic for anyone who has not been vaccinated”. That’s because they will be banned from all public indoor venues like bars restaurants, gyms, etc.

However, the restriction is necessary as “we cannot deprive those who have been vaccinated of their freedoms. They have done everything to protect themselves and others and to slow down the pandemic”, the president said in an interview with SonntagsZeitung.

The new Swiss train timetable is on the right track

New Swiss Federal Railways (SBB) schedule went off without a hitch on Sunday. Both national and international connections are running smoothly and on time, the company said.

They include the new Nightjet service from Zurich to Amsterdam via Basel. Passengers can now also  travel for the first time without changing trains from Zurich, Zug and Ticino to Parma and Bologna in Italy.

With the new timetable, the journey time of three of the six connections between Zurich and Munich is also reduced by around 30 minutes to three and a half hours.

Where in Switzerland is the risk of avalanche the highest?

The snow that covered Switzerland extensively on Friday heightened the risk of avalanches in the Alps, according to the Institute for Snow and Avalanche Research (SLF).

The cantons of Valais, Vaud, Bern, Obwalden, Uri, Glarus and St. Gallen are particularly affected right now. In the other regions of the Alps and in the Jura, the risk of avalanches is slightly lower but it exists nevertheless, SLF said, skiers and other winter sports enthusiasts should be careful and not wander off-piste.

A new five-cent stamp is available for purchase

From 2022 a B Mail letter will cost 90 instead of 85 cents. This is why Swiss Post has to print new five-cent postage stamps.

They can be ordered starting today on the Post’s online shop and will be sent out by December 27th.

From December 20th they will also be available at the post office counter. The A and B Post stamps are currently also being printed with the new tariffs.

Which of their cities do Swiss like the most?

This answer comes — as everything does nowadays — from Google, whose analysis of searches reveals the cities that the Swiss found most likeable in 2021.

It is interesting that Aarau is among the most appealing places in Switzerland, given that another survey of this kind carried out in 2019, showed that “almost nobody in Switzerland” likes Aarau.

Respondents in that study said the town, located in the northern part of the country, lacks cultural opportunities. They also give it a low rating because they don’t like the Aarau dialect.

Which of the two surveys is more believable? Ask Google.

READ MORE: What is Switzerland’s loudest city – and how loud is it?