For a small, neutral country, Switzerland has a habit of invading its neighbours. Here are some of the best examples.

Good thing Alain Berset is in charge the Ministry of Home Affairs rather than of international diplomacy.

However, according to the report, French president Emmanuel Macron was informed of the incident, but there is no update on any imminent diplomatic or monetary repercussions. 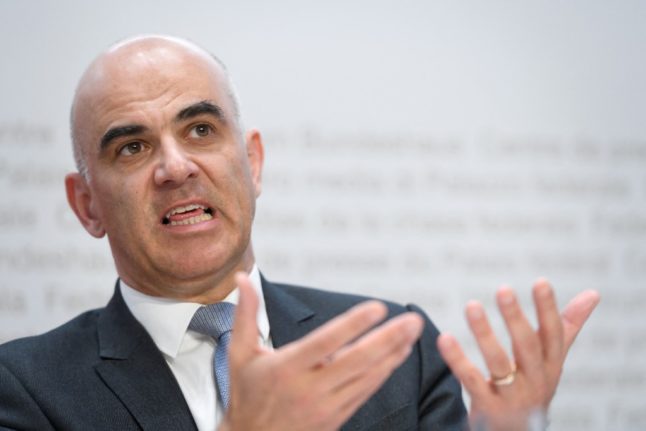 Berset may have some explaining to do. Photo by Fabrice COFFRINI / AFP

A history of Swiss “invasions”

Berset’s detour is not the first time in recent history that the Swiss ventured uninvited into a foreign territory, or, for that matter, into France.

In 2015, Swiss army helicopters flew into a small French town of Les Rousses to draw water from its lake to quench the thirst of Switzerland’s cattle.

It was part of the military’s assignment to airlift water to about 20,000 cows grazing on mountain pastures and to set up water tanks for the livestock.

Les Rousses authorities rightly claimed that Switzerland has plenty of lakes of its own with more than enough water for its cattle; the Swiss, on the other hand, said Les Rousses’ lake lies closer to one area of the operation.

After a hastily convened meeting between the two countries, Switzerland’s Defense Ministry apologised to Les Rousses and its residents; the apology was accepted, and the whole incident is now water under the bridge.

But that’s not all

Thirty years before it stole from the French lake, Swiss army was already in a lot of hot water.

In 1985, during a training exercise in the proper use of ground-to-air-missiles, Swiss artillery launched rockets straight into Liechtenstein, igniting a massive forest fire along with a diplomatic snafu.

The Swiss had to pay several million francs for damages inflicted on Liechtenstein’s forests.

On a rainy night in 2007,170 Swiss troops armed with rifles (but apparently not with a GPS) stumbled into Liechtenstein. They marched on for more than a kilometre until someone exclaimed, “Hey, this isn’t Switzerland”! (“Hey, das isch nöd d Schwiiz”)!

At this point, the soldiers turned around and hot-footed it back home.

In all fairness, it is difficult to tell Switzerland apart from Liechtenstein, even in broad daylight. Rural areas in both countries look the same, and people in both nations speak the same Swiss-German dialect and use Swiss franc as their currency.

Imagine how much more complicated it is to distinguish one country from another when it’s dark and raining.

However, Liechtenstein officials proved to be more tolerant of the Swiss armed forces than the French were.

“It’s not like they stormed over here with attack helicopters or something”, Markus Amman, Liechtenstein’s spokesman for the Interior, remarked at the time.