A rush on solar panels, new Swiss passports, monkeypox update, and other news in our daily roundup on Tuesday.

The energy crisis, which has sparked fears over shortages and concerns about high costs, is causing an unprecedented rush for solar panels among Swiss homeowners.

But although the demand is at its highest right now, there is a shortage of photovaltic panels and inverters — essential components of the system.

The sector is lacking not only the necessary equipment, but also the manpower. For this reason, it now takes up to 12 months to get solar panels delivered and installed, and some suppliers are so overwhelmed, they no longer respond to requests for information.

New series of Swiss passports to be launched in autumn

Starting on October 31st, Switzerland’s passport will be updated, the government announced on Monday.

While it will still have the same red cover with a white cross logo that has been in circulation for the past 20 years, one of the passport's inside pages will be devoted to the so-called “fifth Switzerland” — that is, the Swiss living abroad — alongside the 26 cantons. The original “four Switzerlands” are the country’s linguistic regions.

All identity documents issued to date will remain valid until their expiration date , authorities said, but passports renewed or issued for the first time after October 31st will feature the new design.

Recent reports in the Swiss media that Helsana is offering cheaper supplemental health insurance to members of an anti-abortion organisation has stirred up widespread criticism in Switzerland.

While this measure may not be illegal, “it is ethically questionable”, said MP Baptiste Hurni, who is also president of the association representing patients' interests, echoing the reaction of many other officials.

On social media too, politicians and private individuals, are criticising Helsana’s position, with many threatening to cancel their policies with the carrier.

More than 400 cases of monkeypox reported in Switzerland

Up to Monday 11 am, 416 cases of monkeypox have been detected in Switzerland, according to the Federal Office of Public Health (FOPH).

Cases have jumped substantially since the first infection was reported in Switzerland on May 19th.

This FOPH mao shows where in Switzerland most cases have been found. 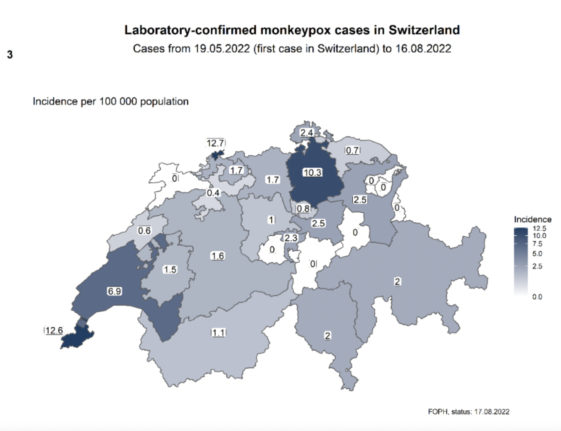 Unlike its neighbours, however, Switzerland still doesn’t offer vaccination against monkeypox.

"Some patients have told us that they have managed to get vaccinated elsewhere, travelling even as far as Canada. People are very creative in obtaining this vaccine, but I find it a shame that resourcefulness [of individuals] is the only way to get what I believe we are entitled to in our society”, Calmy added.