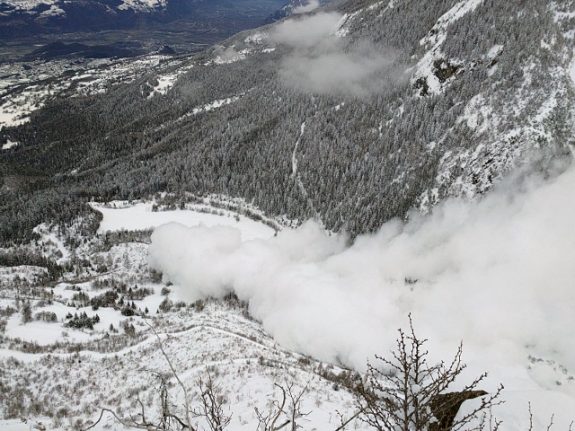 Photo: Margherita Maggioni
The experiment by the Institute for the study of snow and avalanches (SLF) took place in the organization’s research zone in the Sionne valley in the canton of Valais.
The biggest avalanche on the site in 11 years, it was set off by explosives launched from helicopters, the SLF said in a statement.
A wall of snow travelled for 2.5km down the valley, with researchers able to monitor it via a 20 metre-high pole equipped with various instruments.
The institute has carried out some 12 such experiments in the past 20 years, with the information gathered feeding into an avalanche simulator that helps specialists better prepare and protect avalanche zones.
“The success of this experiment depends on a combination of factors such as the quantity of snow, the composition of the snow cover and good visibility for the helicopter and the measuring instruments,” said SLF scientist Betty Sovilla.
The devastating power of an avalanche was demonstrated for real while SLF was preparing for its experiment, as  a natural avalanche tore through a small hamlet above the Valais village of Salvan on Wednesday morning.
Since the hamlet is only accessible on foot or skis in winter, none of the chalets was occupied at the time of the avalanche and there were no victims, reported news agencies.
However it suffered considerable damage, with one chalet destroyed and some 15 others – some of which were 200 years old – partially or completely buried in snow.
The avalanche started at 2,300m and travelled 1,000m down the valley across an area 300m wide, said broadcaster RTS.
Never had the commune experienced such a big avalanche, the president of the Salvan commune told the media.