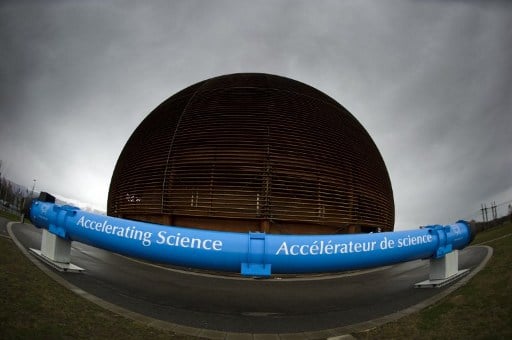 CERN in Geneva. Photo: Fabrice Coffrini/AFP
The March for Science is part of a global network of science marches held on the same day aiming to celebrate science and affirm its importance to society.
Geneva contains one of Europe’s – and the world’s – most important scientific communities, not least due to the presence of the European Organization for Nuclear Research (CERN) which brings together scientists from all over the world to study the fundamental questions of the universe.
Founded in 1954, CERN is best known as the place where the world wide web was created by Tim Berners-Lee in 1989, and as the site of the Large Hadron Collider, the world’s largest particle accelerator.
Though the apolitical organization is not officially backing the March for Science, many of its scientists are involved in organizing it and many more plan to participate.
“We are all concerned private citizens and we happen to be scientists on the side,” CERN researcher and march organizing committee member James Beacham told The Local.
“We’d much prefer to just be doing research but we are confronted with such a bizarre uptick in anti-science rhetoric around the world at the moment that it becomes necessary for us to stand up and say something, to try to say science does matter and facts do exist. The notion of alternative facts is not something that’s real.”
“Officials in major governments are denying the fact of climate change due to human consumption of fossil fuels and everything builds up and you have to say stop.”
Organizers stress that the march is non-partisan and does not specifically target US president Donald Trump, but acknowledge they have been spurred on by the election of a climate change denier – who last week signed an executive order to roll back Obama’s plans to curb carbon emissions.
“It’s not exclusively his problem, it’s not exclusively something he’s brought to the world but it is something he’s brought to an extreme,” says fellow committee member and CERN researcher Tova Holmes.
As seen with the Geneva women’s march in January and a second in Zurich last month, communities that hadn’t previously considered protest marches have been “galvanized” by Trump’s election, she adds.
“The scientific community saw how it was being rejected, not just in the US but across the world.”
The committee has reached out to multiple Swiss political parties and both US expat political associations, Democrats Abroad and Republicans Overseas, in an attempt to make the march fully inclusive.
“We want everyone to recognize that the scientific method is real for everybody irrespective of your political affiliation,” says Beacham.
“When you have statements and policies that are being pushed that are antithetical to science itself and to the concept of the fact, this is a non-partisan problem.
“Whether or not you may personally support Donald Trump is irrelevant, because the actions that are being taken by governments such as the Trump administration will affect us all, period.”
The two-pronged event in Geneva city centre will begin with a rally at the Place du Rhône kicking off the march, followed by a family-friendly ‘celebration of science’ comprising talks, music and exhibits from researchers around Switzerland, aiming to “really remind people that science is part and parcel of their lives”.
Scientists from Lausanne – whose strong scientific community revolves around technology institute EPFL – are also involved, while organizers hope to attract people from all over the country to the march.
“The Geneva region is a shining example of what science can do when it embraces worldwide diversity and science just for the sake of the human good,” says Beacham. “We are trying to leverage Geneva’s reputation for that all over the world.”
READ MORE: Thousands march in Geneva: 'we're hoping they're going to listen'