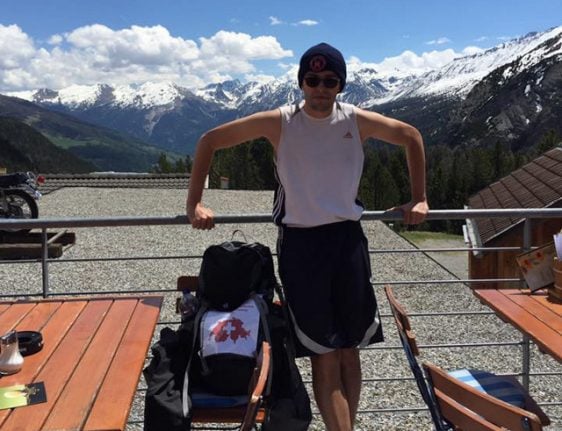 "It’s unquestionably the most beautiful country". Photo: Izyaslav Koza
Izyaslav Koza, 33, ran approximately 500km across the country, starting in Müstair on the Italian border on May 22nd and finishing in Chancy in the canton of Geneva on May 31st.
A self-supported run, he carried his own food, water and belongings and covered around 50km per day, staying in hotels at night.
His run took him through the Swiss National Park, Davos, Zurich, Biel/Bienne, Neuchâtel, Nyon and finally Geneva.
Koza, originally from Moldova but now living in New Jersey, US, is an experienced long-distance runner who has previously run across five other countries including Cuba, Ireland and France.
His epic challenges are partly about proving his love for his girlfriend, he told The Local on Wednesday as he neared the end of his run.
“All these runs were associated with winning her heart,” he said. “It was something I found necessary. It’s easy to say you care about someone when you are in a comfortable situation but when you are out of your comfort zone…[it’s more difficult].”
He chose to tackle Switzerland because it’s an important place for his Ukrainian-born girlfriend, who once had a fleeting chance to live here before finally ending up in the US.
“The idea was to run Switzerland and propose,” he said.
During his run he overcame illness and blisters, had to cope with a heatwave and ran over two tough mountain passes. But the beauty of the country kept him going.
“It’s unquestionably the most beautiful country. Every day you have mountains or lakes. When you’re running in a drearier part of a country it’s harder psychologically, but Switzerland had no issue like that because everything is beautiful.”
READ ALSO: Run with a view: ten breathtaking Swiss mountain races
As a first-time visitor to Switzerland he found certain things surprising, not least the Swiss attitude to punctuality.
“In another country if you come in ten minutes after a shop is supposed to closed, they’ll help you out. But in Switzerland… it felt very punctual, it’s 12pm, that’s it, it’s closed.”
On the plus side, “in Switzerland one of the positive things is that everywhere there’s free water!”
The attitude of people he encountered along the way has been a “mixed bag” but he’s grateful for the warm welcome he received from some.
“Yesterday I came upon an Italian restaurant and as soon as I stepped in the owner heard my story and said I have to treat you lunch, it’s on me. I was really touched. It’s nice when somebody feels they want to be hospitable.”
Koza with his new friends in the Italian restaurant. Photo: Izyaslav Koza
But his favourite moment was seeing the welcome sign for Geneva, signalling that the end of his trip was near.
“When you are in a car or bus these signs don’t really mean much.. but when you are running they do,” he said.
His girlfriend flew in to meet him and he finally proposed after finishing his trip on Wednesday evening.
She said yes.
The happy couple. Photo: Izyaslav Koza
READ ALSO: Expats lace up running shoes for Swiss mountain races 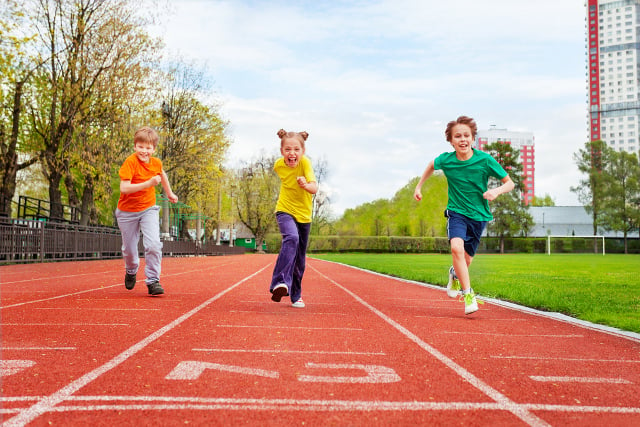 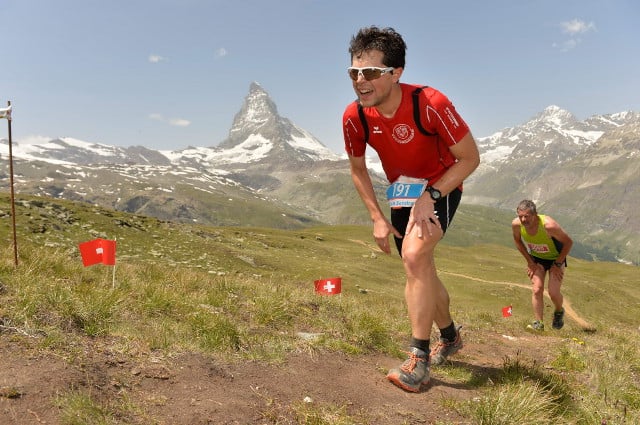 Photo: Zermatt marathon
Here, The Local outlines this year’s most spectacular – and sometimes slightly bonkers – mountain races in the country. Take them on, if you dare…
1. Aletsch Half Marathon Photo: Aletsch Arena
Date: June 18th  Length: 21.1km Elevation change: 700m up
Starting in Bettmeralp, this stunning course takes you along the ridge above the Aletsch glacier, the longest iceflow in the Alps. The final tough climb up the Bettmerhorn will be worth it for the glorious views over the glacier below.  aletsch-halbmarathon.ch
2. Engadin Ultraks St Moritz
Date: July 1st  Length: Various, 16.3km-46.6km  Elevation change: Various, 1,300m-3,019m
Explore the Engadin on foot in an epic trail run from Pontresina into the surrounding mountains. Its three trails of different lengths are designed to make the event accessible to both pros and amateurs. engadin.ultraks.com
3. Zermatt Marathon
Photo: Zermatt Marathon
Date: July 1st  Length: 42km  Elevation change: 1,466m up  444m down
Runners start at St Niklaus and run through the winding valley gradually climbing up to Zermatt and then on up to the finish at Riffelberg. However if you enter the ‘Ultra’ version, you’ll still have a further 3.4k m and 514m elevation to go before you reach the Gornergrat, where you’ll (weather permitting) be rewarded with a wonderful view of the Matterhorn. There's also a half marathon course from Zermatt to Riffelberg.  zermattmarathon.ch
4. Montreux-Rochers de Naye
Date: July 2nd Length: 18.8km Elevation change: 1,600m up
If there’s a mountain, you can be sure someone wants to run up it. This course starts in the town of Montreux on the shore of Lake Geneva and takes competitors up all the way up to the highest peak in the area, Rochers-de-Naye. Those looking for a slightly smaller challenge can start at Caux, about half way up. Just don’t get upset when you get to the top and see all the tourists who took the train up. montreuxlesrochersdenaye.ch
5. Eiger Ultratrail
Photo: Eiger Ultratrail
Date: July 15th-16th  Length: Various, 16km-101km Elevation change: Various, 960m-6,700m
Take your pick from the various different races in this competition, starting at a meagre 19km ‘pleasure trail’ up to the intimidating 101km ‘ultratrail’ which covers an epic 6,700m elevation change. Along the way you’ll take in some of the area’s most spectacular spots including the Faulhorn – Europe’s oldest mountain hotel – the car-free village of Wengen and the base of the Eiger North Face. eigerultratrail.ch
6. Swiss Alps Endurance Run
Photo: Jakob Herrmann/SwissAlps100
Date: July 15th  Length: 80km  Elevation change: 2889m up 2812m down
This brand new race for 2017 is certainly a challenge. Starting in Oberwald it traverses through valleys and mountain peaks and includes one section of 1,128m elevation over 10km called ‘the beast’. There’s also a half marathon distance.  swissalps100.com
7. Swissalpine Marathon Photo: Swissalpine/Swiss-Image.ch
Date: July 23rd-30th  Length: 23km-77km Elevation change: max 2,800m
With various races of different lengths and distances held around the Davos-Klosters area, there’s something for everyone here (even kids – there’s a 0.5km race for little ones). This year the SwissAlpine merged with the Swiss Irontrail which will take place at the same time. Only hardcore trail runners should apply for that one – the three-day event covers a whopping 214km and over 11,000m of elevation change. Ouch. swissalpine.ch
8. Glacier 3,000 Marathon
Photo: Glacier 3,000
Date: August 5th  Length: 42km Elevation change: 1,900m up
Now in its tenth year, this run takes you from the pretty and posh alpine village of Gstaad in the valley up to one of Switzerland’s highest ski areas, the spectacular Glacier 3,000. glacier3000run.ch
9. Sierre-Zinal
Photo: Pete Hartley/Sierre Zinal
Date: August 13th  Length: 31km Elevation change: 2,200m up, 1,100 down
You’ll get a view of five 4,000m peaks as you run this longstanding annual race from Sierre in the Rhone valley to the ski village of Zinal in the Val d’Anniviers – no wonder it’s considered one of the most beautiful courses in the world. sierre-zinal.com
10. Jungfrau Marathon
Photo: Jungfrau Marathon
Date: September 9th  Length: 42km Elevation change: 1,829m up
Perhaps the awesomeness of running past the Eiger, Mönch and Jungfrau mountains will ease the pain of this marathon course that starts in Interlaken and ends at Kleine Scheidegg. Despite its extreme nature, it’s also extremely popular and all 5,000 places have already sold out this year, so save it for 2018 and get in quick. jungfrau-marathon.ch
READ MORE: Expats lace up running shoes for Swiss races
SHOW COMMENTS 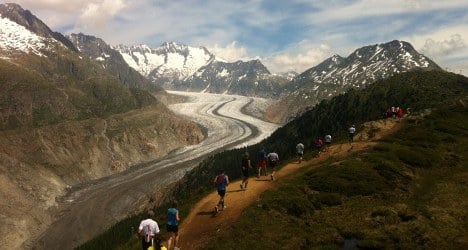