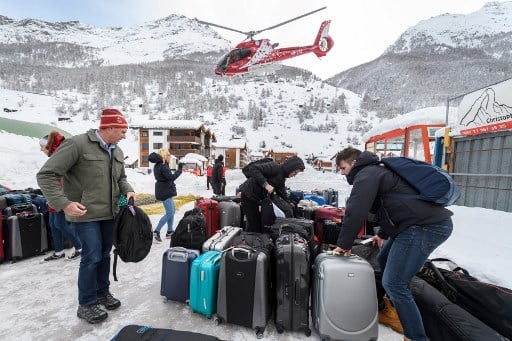 Helicopters airlifted people out of Zermatt as they did earlier this month. Photo: Fabrice Coffrini/AFP

Rail connections resumed on Wednesday evening when the first trains began running on the Matterhorn-Gotthard line between Zermatt and Täsch, 5km to the north.

But the road between Täsch and Zermatt remained closed owing to the risk of avalanche, according to a police spokesman, the Swiss news agency SDA reported.

A bus service is in operation between Visp and Täsch.

Since the weekend, the car-free village in the canton of Valais had been inaccessible after two metres of heavy snow fell in the area – the second time this month it had been cut off.

READ ALSO: ‘We’ve got the slopes to ourselves’: locals are happy to be stuck in Zermatt

Local residents and stranded tourists had to rely on helicopters for transport and food deliveries.

The risk of avalanches has been lowered from very high to considerable, according to a bulletin of the institute for snow and avalanche research SLF on Thursday.

In the four days that the village was cut off, the Air Zermatt helicopter company transported more than 5,000 people, SDA said.

Up to five helicopters were constantly deployed to ensure an air bridge to Zermatt.

But for most people waiting to leave there was a long wait for a ticket.

At no time were the lives of residents in danger, the local tourist office said.