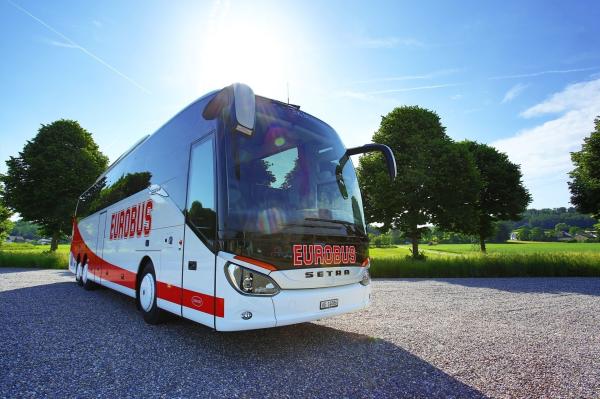 The three lines operated by Eurobus in a business partnership with German bus giant Flixbus will link Switzerland’s major cities, providing a cheaper, but slower, alternative to the country’s expensive trains.

One route will link Geneva Airport with the city of St Gallen, a second will connect Chur in Graubünden with the city of Sion in Valais, and a third line will run from Zurich Airport to Lugano in the Italian-speaking canton of Ticino.

Read also: Switzerland has the best railways in Europe – survey

Sample one-way, full-price ticket costs include 23 francs from Zurich to Bern (against 50 francs for a full-price train ticket), 42 francs for Basel to Bellinzona (the train fare is 80 francs) and 49 francs for the journey from Geneva Airport to Zurich Airport (96 francs on the train).


The new Eurobus network in Switzerland.

Eurobus also accepts SBB half-price travel cards: this means, for example, a ticket from Zurich to Bern on the bus with the half-price card would cost 11.50 francs (against 25 francs for a half-price ticket on the train).

Holders of the GA/AG travel card are able to travel free on the buses but have to pay a €5-franc booking fee for each leg of the journey.

Tickets went on sale on Tuesday and are available on the Swiss Express and Flixbus websites.

However, The Local was unable to book bus tickets using a half-price ticket on Tuesday afternoon. A spokesperson for Eurobus told us technicians were currently racing to ensure this option was available.

There will two daily services in each direction on all three lines: one on the morning and one in the evening.

The network’s 36 bus stops, which are not always very central, will be feature both Eurobus and Flixbus branding.

Meier stressed Flixbus had not invested in Eurobus but Handelzeitung said the German firm had entered Switzerland “through the back door”.

Eurobus hopes to open seven further lines in Switzerland in future to locations including the tourist area of the Bernese Oberland, the company said in a statement.

The new long-distance bus lines in Switzerland were originally announced in February with small Swiss firm Domo Swiss Express SA. the winner of the concession. But Domo has since been taken over by Eurobus.

The SBB has already responded to the increased competition, bring down the prices of its supersaver tickets and making more cheap day tickets available.