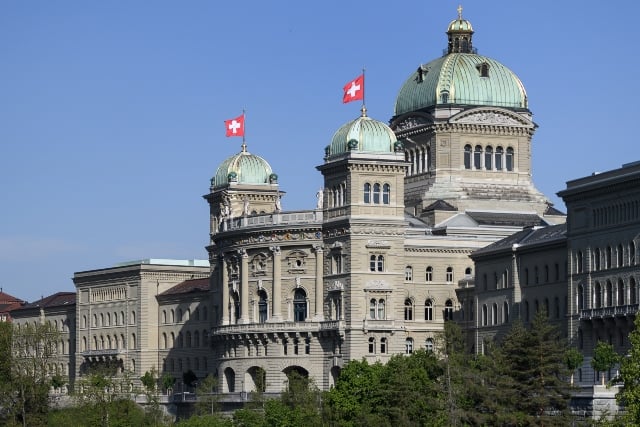 In the October 20th poll, Swiss voters will cast their ballots for 200 members of the lower house of the Swiss parliament, the National Council, and for 45 of the 46 members of the upper house, or Council of States (the canton of Appenzell Innerrhoden already voted for its candidate in April).

In theory, anyone with Swiss citizenship can run as a candidate in Swiss federal elections. However, the vast majority of candidates represent the country's four major parties with a handful of smaller parties making up the numbers.

Here we take a closer look at Switzerland's most biggest parties and what they stand for.

The conservative SVP is Switzerland's largest party in the National Council after winning just over a third of all seats (65) in the 2015 election. It has far less influence in the upper house, however, holding just five of the 46 seats in the Council of States.

Traditionally a party representing farmers and small business owners, the party has been something of a pioneer in right-wing populism in the recent past with party figurehead Christoph Blocher largely responsible for the new-look party. The SVP supports controlled immigration and is strongly anti-European Union. It is therefore against Switzerland signing the current draft deal with Brussels on the future of bilateral relations between Bern and the bloc.

READ ALSO: What you need to know about the draft Swiss-EU deal

The centre-right Liberals are only the third largest party in the lower house of the Swiss parliament with 35 of 200 seats. However, they have the joint strongest showing in the upper house with 13 of 46 seats.

The FDP are the party of big business and small government. However, they have struggled slightly to defend their place in the Swiss political landscape in the wake of the rise of the SVP. Having lost some votes to their right-wing opponent, they have been trying in recent months to boost their green credentials to win over new voters.

The Liberals have clearly backed strong bilateral relations with the bloc and are well aware of the importance of the Swiss-EU freedom of movement treaty when it comes to ensuring Swiss firms continue to be able to easily hire top talent from other EU countries. In fact, they are the only party to have called for the draft Swiss-EU deal on bilateral relations to be signed in its current form.

The left-wing Socialists are the second biggest party in the Swiss lower house behind the SVP with 43 seats. They also have a strong showing in the senate with 12 of 46 seats.

The SP are closely allied to Switzerland's unions and stand for social justice. As an indication of their positions, they are currently running two major referendum campaigns: The 'glacier initiative' which calls on Switzerland to become carbon neutral by 2020 and an initiative calling for Swiss health insurance premiums to be capped at 10 percent of household income (as is currently the case in the canton of Vaud).

The SP has said the current draft deal with the Brussels is not acceptable are Swiss wage protection measures are not adequately protected.

The centre/centre-right CVP holds 27 seats in the National Council, making them the fourth largest party in the lower house of the Swiss parliament. On the other hand, with 13 seats in the upper house, they have the equal largest representation there alongside the Liberals.

Traditionally a Catholic conservative party, they balance social justice policies with a pro-business stance. Like the Liberals, however, they have lost votes to the SVP in recent times. Viola Amherd is the only Swiss government minister from the SVP. Photo: Hans Punz/APA/AFP

They won 12 percent of the popular vote in 2015 and there are concerns this could now fall under 10 percent on the back of decreasing relevance.

The CVP has committed itself to maintaining strong relations with Europe. However, the party has said the current draft agreement on bilateral relations with the EU must not be signed “at any price” and has said it shares the government's concerns over sticking points including the possible extension of welfare benefits for EU citizens living in Switzerland and the threat to Swiss wage protection measures.

While the left-wing Greens are not one of the traditional “big four” parties in Switzerland, they do have 11 seats in the National Council and one in the Council of States. The Greens are also included here because pollsters are predicting they could be one of the big winners in October's poll, possibly picking up 10 percent of the popular vote.

The Greens describe themselves as ecologically conscious, socially engaged and globally-minded.

Like the Socialists, the Greens have expressed concerns over the fact the draft Swiss-EU deal could spell the end of Switzerland's wage protection measures. The party argues that any deal with the EU that doesn't protect Swiss workers will increase support for an SVP-backed referendum calling for the freedom of movement treaty between Switzerland and the EU to be scrapped.