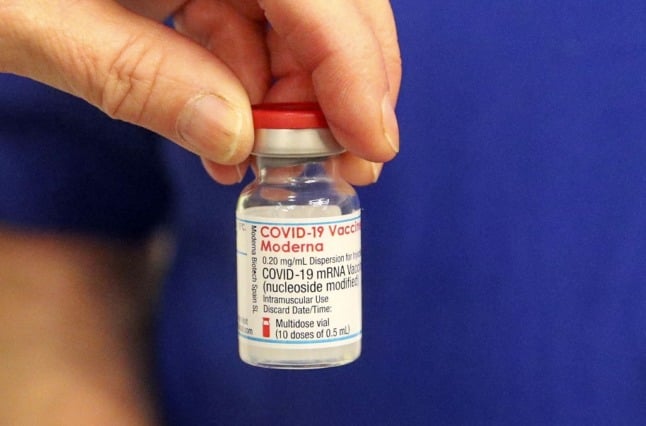 Moderna is one of the vaccines used in Switzerland's immunisation campaign. Photo by Steve Parsons / POOL / AFP

While announcing which measures would be eased from May 31st, the Federal Council remarked that relaxations “go further than originally planned”.

The reason for this positive development, authorities said, is that the epidemiological situation in Switzerland has much improved in the past few weeks, with the number of infections, hospitalisations and deaths falling sharply across the country.

“Each passing day brings us closer to the end of this pandemic ”, said Health Minister Alain Berset.

Judging by this and other comments that Berset made about the positive evolution of the pandemic, it may appear that the government is taking credit for managing the health crisis the right way.

However, the Federal Council has also made some mistakes along the way, which some would argue is understandable given the unprecedented nature of the outbreak.

These are some notable ones.

The government initially underestimated the seriousness of the outbreak

On February 24th 2020, just as the first coronavirus case was detected in Switzerland, Daniel Koch, who at the time was the head of the infectious diseases unit at the Federal Department of Public Health (FOPH), mistakenly said that “the virus is not transmitted as easily as the flu, so there is a good chance that the situation will be under control”.

On the same day, one of Koch’s subordinates reportedly argued that the coronavirus represented “a particular threat to public health” and recommended that the Federal Council implement emergency measures to curb the spread of the virus.

However, his warning was initially ignored, and the state of emergency was declared only on March 16th.

Mask requirement was enforced too late

There had been much debate within the government about the necessity for the public to wear masks. But even as other countries implemented this requirement, Swiss health authorities still insisted this measure was not necessary.

From mid-March until the end of April 2020, when the Covid outbreak was at its worst, “asking people to wear a mask permanently outside… doesn’t work for Switzerland,” Swiss president Simonetta Sommaruga said at the time.

The minutes from the meetings of the government’s crisis units show that at the beginning of the outbreak Switzerland only had two and a half weeks of stocks available.

“At the height of the pandemic, the Federal Council’s position on masks varied depending on the stock available in the country,” Le Matin Dimanche reported.

“A week later, the FOPH advised the population to wear a mask when the physical distance of 1.5 metres couldn’t be respected,” the newspaper reported.

In the summer of 2020, after the first-wave infections started to decline, the government re-opened much of the economy.

However, infections started to soar soon after, morphing into the second wave by the fall.

Berset admitted in December that the government made mistakes in managing the pandemic. “We were too lax and far too optimistic”, he said.

But as time went by and more information became available about the virus, authorities adopted a more measured approach. Here’s what Switzerland did right.

In March of this year, the government implemented a free mass testing scheme, even for those who had no coronavirus symptoms.

In addition, every resident is entitled to five free ‘home tests’ each month.

With the screening scheme, more contaminations were detected, leading to more people being put in quarantine and isolation, thus preventing the virus from spreading.

READ MORE: Everything you need to know about Switzerland’s free coronavirus tests for every resident

Despite some delivery delays in the winter and spring, the country managed to fully vaccinate more than 1.5 million people to date, and the programme is going full speed with the government promising to inoculate everyone who wants it by summer.

How do we know Switzerland is on the right path?

“There are almost no more Covid patients over 75 years of age in hospitals and, despite the reopening of shops and terraces, the cases have not increased again”, noted Geneva epidemiologist Alessandro Diana.