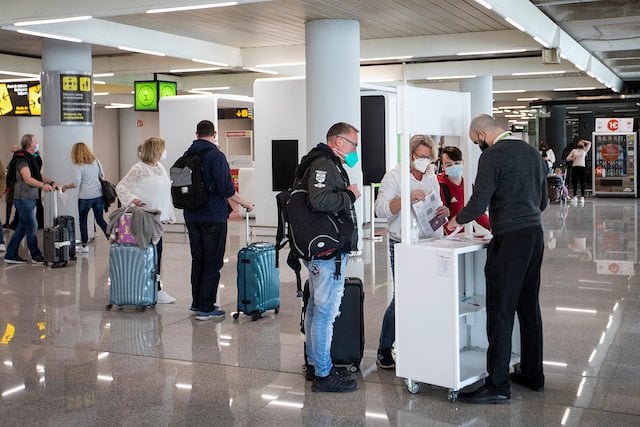 The Yanks are coming: make sure you have the necessary documents. Photo: JAIME REINA / AFP

Before the pandemic struck and travel restrictions were implemented, it was easy for American tourists to enter Switzerland.

In most cases, a valid passport was sufficient.

However, things are much more complicated now.

At the moment, travellers from the US must follow these entry rules.

They must have a QR code

Before boarding the plane, an electronic entry form must be filled out. Once you complete it online and send it back, you will receive a personalised QR code as proof of registration.

You will be asked to show this code at the airport check-in, at all transit airports, and at arrival in Switzerland.

You must be inoculated with one of the vaccines approved by the European Union, which currently are Moderna, Pfizer / Biontech, AstraZeneca, and Johnson & Johnson.

Also, you must have proof showing you have been fully vaccinated — an official document issued by a recognised health authority.

It can be either in digital or in paper form, must have your full name and date of birth, dates when both doses were administered (or a single dose in case of a Johnson & Johnson vaccine), as well as the name and batch number of the vaccine.

One thing to keep in mind is that travel should take place at least 14 days after the final dose, which is when immunity to coronavirus is believed to fully kick in.

In addition, people can enter from non-Schengen zone countries, provided they have recovered from the virus in the past six months.

To prove it, you need either a medical certificate which shows you have had the virus – or a confirmation of a positive test. This must be within the last six months but more than ten days ago.

What about those not vaccinated or recovered?

If the person is not vaccinated, or only partially vaccinated, they would have to present a negative Covid test, either PCR or antigen, taken within 48 hours before arrival in Switzerland.

If no test can be shown, then the person will have to quarantine for 10 or seven days, which pretty much defeats the purpose of  a vacation.

These rules apply not only to US passport holders but to any resident of the United States, regardless of nationality.

What about the health pass / Covid certificate?

To date, the United States, unlike Europe, has not issued such a document, though there is an ongoing debate on this subject.

However, vaccination or recovery certificate, as mentioned above, is sufficient for entry to Switzerland.

What about American tourists who arrive to Switzerland after holidaying in other European countries?

It doesn’t matter whether a person transits through or stays in another country before arriving in Switzerland.

The same rules — that is, either the vaccination / immunity certificate or negative test or quarantine apply, even if the traveller arrives from a high-variant area like the UK.

These are the rules and regulations right now, bit they may change if the epidemiological situation in Switzerland and / or the US worsens.