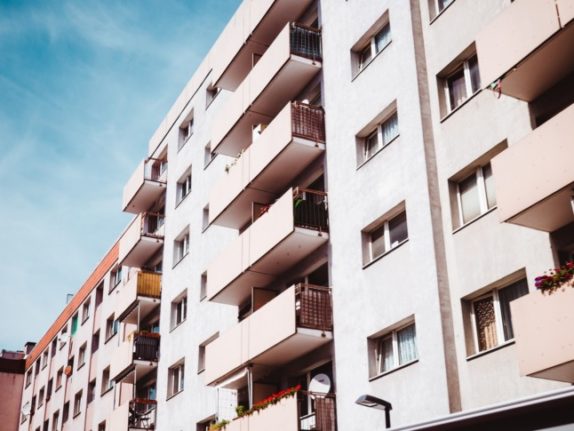 Russian citizens present in Switzerland will have to leave  the country when their visa expires, the Federal Council having declared them unwelcome persons.

But that’s not the only problem they are facing right now: as their credit and debit cards issued by Russian banks no longer work in Switzerland, they may have no access to money, unless  they carry cash.

Another challenge is how to get these people out of Switzerland,  since Russian planes cannot land on Swiss soil, and vice-versa.

However, according to media reports, SWISS airline, whose flights with Russia have been suspended since Monday, can still provide repatriation flights for Russians who have to leave Switzerland.

The shipment to be sent by cargo plane includes essential material for refugees, such as family tents equipped with mattresses, sleeping bags, woolen blankets, heaters, cooking utensils and canisters of water,

Swiss Humanitarian Aid is already setting up a logistics base in Poland to process relief materials from Switzerland. It will facilitate future deliveries to Ukraine, as well as to the border area with Poland.

The cost of these first shipments is estimated at some 8 million francs.

Cantons are preparing for influx of refugees

Cantons and municipalities throughout Switzerland are looking for possible accommodation options for Ukrainian refugees – especially for women and children, as men of military age are not allowed to leave Ukraine.

Cantonal authorities said planning is made more difficult because it is unclear whether the refugees will come to Switzerland in stages or all at once within a short period of time.

Because many children are expected, officials prefer to settle newcomers in apartments rather than in civil protection facilities.

“This is to ensure that these people have good accommodation options in the communities”, said Zurich’s social services director Raphael Golta.

After Sunrise UPC announced  it is waiving the costs of calls to and from Ukraine on its network, its competitor, Salt, has come up with the same kind of offer.

The company announced it would not charge for calls from Switzerland to Ukraine. This also applies to roaming costs for calls to Ukraine and from Ukraine to Switzerland.

The measure is valid immediately and until March 15th, 2022.

Income from real estate is sometimes significantly — and illegally — higher than it should be, a new study shows.

There are regulations in Switzerland against “abusive rents”; drawing an “excessive return” from the rented property is considered “abusive”.

This means that landlords can’t set unreasonably high prices, even if they find someone willing to pay.

But as a new survey by the Bureau of Labour and Social Policy Studies shows, in the  past 15 years rents in Switzerland increased much more than what would be considered reasonable.

During this period tenants overpaid their rent by 78 billion francs, the study found. For each dwelling, this corresponds to an average 200 francs per month.

“The survey proves what we have been saying for years: rents in Switzerland are excessively high in many cases”, said Natalie Imboden, secretary-general of Swiss Tenants Association.

READ MORE: EXPLAINED: The hidden costs of renting in Switzerland