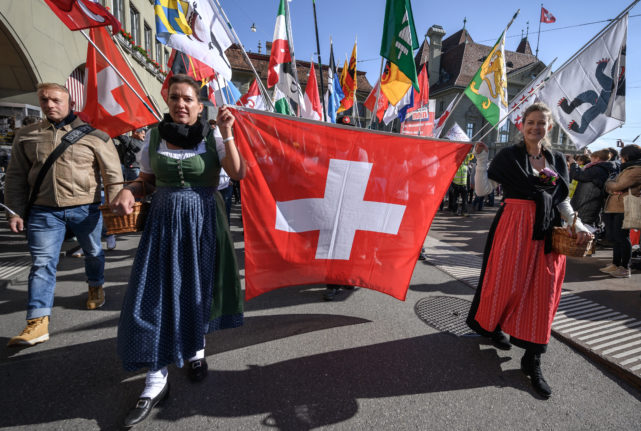 Covid sceptic protesters during a rally in the Swiss city of Bern. Photo: Fabrice COFFRINI / AFP

Just 69 percent of Switzerland is fully vaccinated against Covid, a rate much lower than most of Western Europe.

While the reasons for the low rate of vaccination are many and varied, one major factor is Switzerland’s strong and increasingly radicalised anti-vaccination scene.

Protests were common throughout the pandemic. While these were most prominently seen in German-speaking parts of the country, protests were also seen in French-speaking cantons and Ticino.

This includes noted German conspiracy theorists and sometime musicians Xavier Naidoo and Michael Wendler, both of whom have large online followings.

While there may appear not to be a significant link between Covid denial and support for Russia’s invasion, online groups have argued that Western governments have sought to whip up interest in the conflict to switch the focus from the pandemic.

20 Minutes, which elected not to name the online groups, quoted one saying the Ukraine invasion was the “perfect occasion for governments and media to distract from the damage caused by the corona measures and vaccination”, while several others sought to emphasise “We stand by Russia, by President Putin.”

Several other Covid sceptic groups have not directly endorsed Putin or the invasion, but have been heavily critical of Switzerland’s decision to support EU sanctions, saying it amounts to a “suspension of neutrality”, including groups like Aufrecht Schweiz, Aktionsbündnis Urkantone (AU) and Massvoll.

AU issued a statement saying “(due to) the current sanctions against Russia, Switzerland’s constitutional neutrality, which has proven itself over the past 200 years, has been broken and completely thrown overboard.”

While experts agree with the Swiss government’s contention that neutrality does not mean doing nothing in the face of aggression, those on the far-right – including prominent members of Switzerland’s right-wing Swiss People’s Party – have echoed comments that Switzerland has sacrificed its neutrality.

Why are Switzerland’s anti-vaxxers now pro-Putin?

Experts highlight several reasons for the shift, including a desire to sit on the fringes of all political discussions and trust of Russian state media.

Dirk Baier, a conspiracy theory expert from the Zurich University of Applied Sciences, said the main thread linking opposition to vaccines and support for the invasion was not anything directly related to the issues, but a desire to position oneself against the “mainstream”.

“Had it not been for the war in Ukraine, it would be a different issue on which these individuals would have gone in opposition to the widely held interpretation shared by the majority of society,” Baier told 20 Minutes.

Baier points out that Covid sceptic groups had developed a sense of identity and connection, which began to be lost as Covid fell from the front pages.

As a result, the energy and drive that had been centred around Covid scepticism has been repurposed into ‘critical thought’ on other prominent matters of the day.

Baier said the role played by Russian state-run media outlets like RT in promoting anti-vaccine views has meant these sources, which have continually towed the Kremlin line on the reason for invasion and have downplayed the brutal nature of the conflict, are seen to be more trustworthy than other sources.

“In conspiracy ideological circles, the Putin regime and its outlets are seen as sources of truth that heroically oppose the global conspiracy. This conspiracy narrative is actively being served by the Kremlin” Kovic said.

Citing the ‘sunk costs fallacy’ principle of economics, Kovic also pointed out that many conspiracy theorists stay loyal to their ideas, even if they are radically illogical, as they are close to their identity and it would hurt too much to give up on them.

“People in the pro-action movement have invested a lot of time and energy in their worldview. Giving up hurts. Therefore: the show must go on; a new conspiracy is needed; everything is connected with everything.”