Where will traffic be worst in Switzerland over Ascension and Pentecost?

Heading out on Switzerland's roads over Ascension and Pentecost? Here's where traffic might get a little tight.

While most locals will be able to recognise when heavy traffic days are coming up so they can stay well away, new residents and tourists may have a harder time.

To help out, Touring Club Suisse, Switzerland’s largest motor and mobility authority, each year comes up with the Traffic Jam Calendar, which lists the times of the year when traffic can be particularly bad. 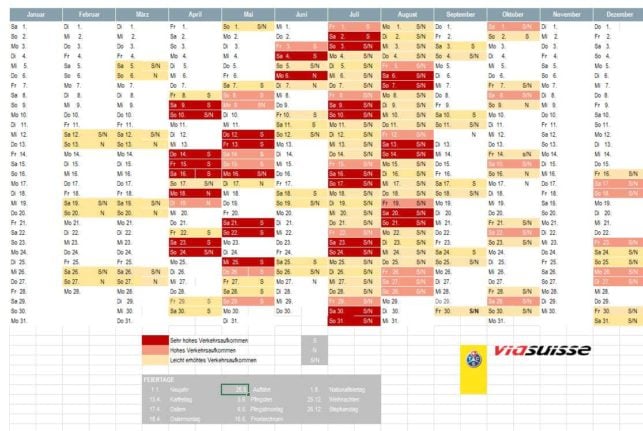 The calendar shown above relates to 2022. The calendar for the current year can be seen here.

What about Ascension and Pentecost?

In May, TCS released a map of the likely traffic hotspots for the Ascension (26th May) and Pentecost holidays (June 5th).

As can be seen here, the roads around Zurich including the A1 and the A51 are particularly busy, as is the A1 near Geneva.

The Gotthard Pass, often a site of traffic jams, is also set to be particularly busy.

For holiday makers, the A13 in the east of the country is also tipped to see very high traffic volumes over the Ascension and Pentecost weeks. 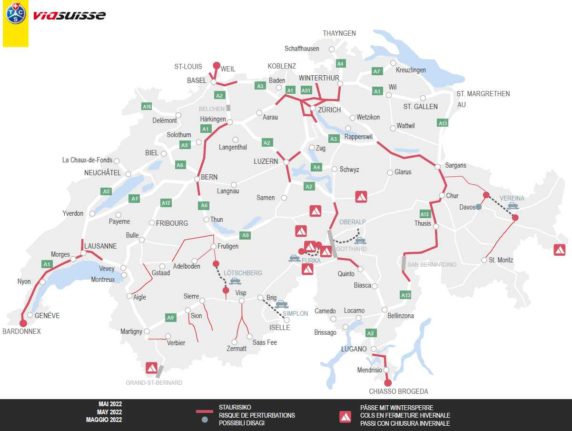 You can download the live road information for Switzerland as an app for iPhone and Android.

Additional trains in service over the Ascension and Pentcoast weekends

Due to the heavy road traffic, Switzerland has added new train lines for the weekends in question.

For travellers who prefer to take the train during this busy period, Swiss Federal Railways (SBB), is “significantly expanding” its service towards Ticino, one of the most popular destinations for public holiday weekends.

“There will be numerous additional trains. We will also be increasing the number of seats available on regular trains”, including between Zurich/Basel and Ticino via the Gotthard Base Tunnel, the company announced.

The company's online timetable, which includes the new trains, is available here.

When is traffic particularly bad in Switzerland?

As can be seen from the calendar, the main days for bad traffic are in spring and summer.

Not only are these the days when the weather is best, but they’re also peak tourist season for domestic and foreign tourists.

While there is not one very high volume traffic day in Switzerland from the start of September until the end of March, there are 32 from April to August.

April alone has eight along with several high traffic days, due largely to the Easter holidays over the weekend of the 16th and 17th. In May, traffic ramps up before Ascension Day on the 26th.

The situation is particularly serious in July and August however, where very weekend day has high traffic volumes.

Even weekdays in these two months have increased traffic volumes, meaning that taking a day off and leaving earlier/coming back later will not be guaranteed to save you some time.

Bottlenecks and delays: Which Swiss cities have the worst traffic?