IN NUMBERS: How Zurich's foreign population has more than doubled

The proportion of foreigners living in Switzerland’s largest city Zurich is now more than twice as high as it was 60 years ago. This is what the situation was then and now.

With a population of 440,181 people, Zurich is not only the biggest Swiss city, but also has one of the highest concentrations of foreigners, according to latest data released by municipal authorities.

About 32 percent of the city’s permanent residents are currently immigrants, but what’s interesting to note is that their number has grown more than twofold in over half a century.

“Sixty years ago, around 64,000 foreigners lived in Zurich; today there are 140,000. The proportion of foreigners is currently more than twice as high as it was then (32.2 versus 14.5 percent)”, municipal authorities said in a press release.

One of the possible reasons for this growth in international residents — in Zurich as well as in Switzerland in general — was the the Free Movement of Persons agreement which Bern and Brussels signed in 1999, and which lifted restrictions on EU citizens wishing to live or work in Switzerland.

There are, however, differences in demographics between 1962 and present time.

In 1962, Italians were the largest foreign group in Zurich, accounting for 44 percent of all foreigners, while today Germans constitute the largest group (23 percent).

This corresponds to the national trend, as Italians and Germans still make up the largest proportion of foreigners in Switzerland as a whole. 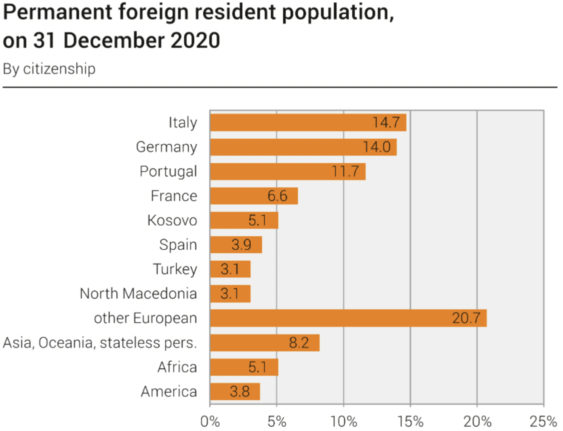 Zurich’s data also reveals other facts about its resident population, which could be of interest to anyone living in the city or planning to move there.

Today, Zurich is Switzerland’s economic powerhouse, with many international businesses located in its vicinity.

READ MORE: Jobs: Why Zurich has rebounded better than other Swiss cities from Covid