The summer has not officially started yet, but very high temperatures are forecast for nearly all Swiss regions in the coming days.

While the temperatures in Switzerland are in their 20s on Monday, they are expected to soar to the sizzling mid-30s by the week’s end, according to meteorologists.

Temperatures will exceed 30C from Wednesday in Switzerland, peaking at 35C (and above) on Saturday.

This is what the forecast calls for: 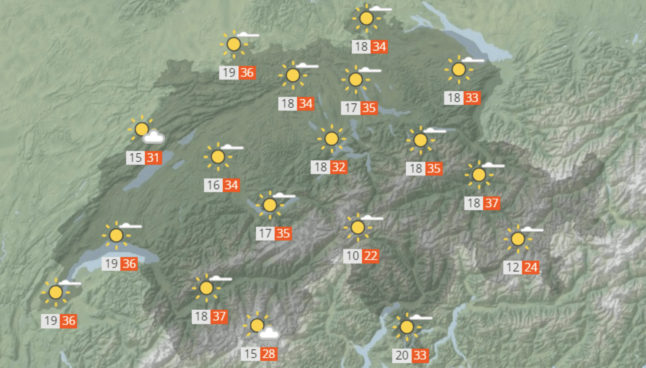 Even higher altitudes, where the temps are usually lower, could reach 30C at around 1000 metres.

While many people are looking forward to the heat wave, the news is not good for the nature, as the drought will likely get worse due to lack of rain.

The precipitation of last week, though heavy at times, “has not reached the deep layers of the ground”, according to MeteoNews weather service.

Although the rain provided some much-needed moisture for the crops, “the water deficit remains worrying”, especially as precipitation was not evenly distributed throughout the entire country.

The heat wave is forecast to end at the beginning of next week, just as the official summer starts on June 21st, with temperatures dropping to more seasonably normal temps — in the mid-20s.

However, it is expected to return a few weeks later:

If you think this is the hottest June in history — it isn’t. The situation was similar as recently as 2019:

While health authorities have not yet issued any guidelines on staying safe during a heat wave, The Federal Office of Meteorology (MeteoSwiss) confirmed the dangers of extremely high temperatures on humans and nature alike.

A hot spell can also have adverse effects on nature and infrastructure. For example, bodies of water often heat up considerably, causing fish to die, while high temperatures can lead to buckling of road surfaces and deformation of railway tracks”.