Government confirms energy cost hikes, health costs also set to increase, and other Swiss news in our roundup on Wednesday.

While the increase is not exactly a surprise for most people — the media, including The Local, have been writing about the expected hikes — now the Federal Council has also confirmed this information.

“Swiss electricity prices will rise sharply for households in 2023”, the government said on Tuesday.

It added that based on data from the Electricity Commission (Elcom), the price of electricity will increase by an average of 27 percent in 2023. Locally, however, the differences could be much higher.

As the Local reported on August 31st, tariffs in Vaud and Basel will be the highest in Switzerland, soaring by over 40 percent on average.

You can find out what increases are planned for you community in this link.

READ MORE: Which Swiss cantons will see the biggest hikes in electricity bills?

An increase in health premiums is 'inevitable'

As though soaring energy prices were not depressing enough, we now learn that “healthcare costs have not risen as sharply in years”, with further spikes, including in insurance premium, seen as "inevitable".

This information comes from Santésuisse, an umbrella group for health insurance companies, which said on Tuesday that an increase of around 4 percent for 2023 will be the norm.

It adds that although MPs can remedy this situation, “the will to adopt real measures aimed at curbing the rise in costs is hardly perceptible so far”.

Among the solutions that Santésuisse is recommending is the reduction of "excessive and unnecessary" medical treatments, using more generic drugs, which are cheaper than brands, as well as keeping a tighter control of the overall costs.

English is the primary language among the foreign nationals living in Switzerland, according to data released by the Federal Statistical Office (FSO) on Tuesday.

It is also the most widely used non-national language at work.

Next are Portuguese and Albanian.

The study, called “Language landscape in Switzerland”, also re-confirmed that among national languages, German is the most widespread, spoken by 62 percent of the population, followed by French (23 percent), Italian (8) and Romansh (0.5).

This FSO map shows the geographical distribution by linguistic groups. The red is for German, blue for French, green for Italian, and yellow for Romansh. 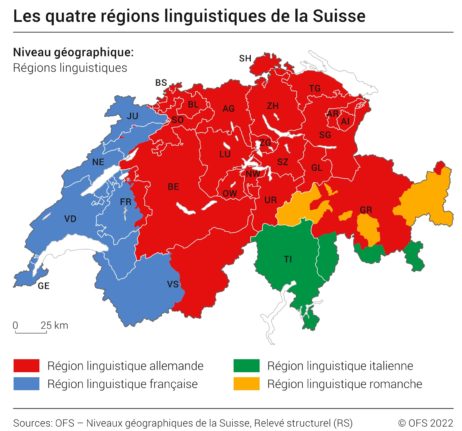 Called “CoffeeB”, the new machine uses fully compostable coffee capsules, which are shaped like a ball.

“While the conventional capsules are partially recyclable, many end up in trash anyway.  The new machine and capsules, on the other hand, offer user convenience and zero waste", Migros’ president Fabrice Zumbrunnen, said at a press conference on Tuesday.

You can see how this machine works in this link.