5 things foreigners need to know before getting married in Switzerland

Thinking of tying the knot in Switzerland? From paperwork and taxes to venues and Swiss traditions, here are some things you should know about.

In Switzerland the state only recognises civil weddings as legally binding.  That means that the wedding must be performed by a local civil authority, traditionally at the registry office.  These are intimate affairs with a small number of guests, lasting around 10-30 minutes. It’ll cost you around 300-400 CHF.

Couples who want to have a religious ceremony or another symbolic ceremony are still required to have a civil ceremony first. You usually present the civil marriage certificate as proof to the priest or celebrant before your ‘official’ wedding ceremony begins.

Assuming you meet the legal conditions required to get married (for instance - being at least 18-years-old) there are several steps, in this order, that you need to take:

Keep in mind that these documents will have to be translated into one of Switzerland’s official languages. Here's a look at what the process looks like:

READ ALSO: Revealed: The Swiss canton with the best tax rates for families

It’s worth mentioning that these days, most civil authorities offer a list of external locations (beyond the registry office) where couples can get legally civilly married.

For instance, Canton Bern offers couples stunning locations like the Harder Kulm above Interlaken, Schloss Spiez, Schloss Schadau in Thun and the Grandhotel Giessbach on the Brienzersee. You could also get married somewhere a little quirkier: at the Zoo in Zurich, a boat in Canton Vaud or even a circus in Canton Glarus. 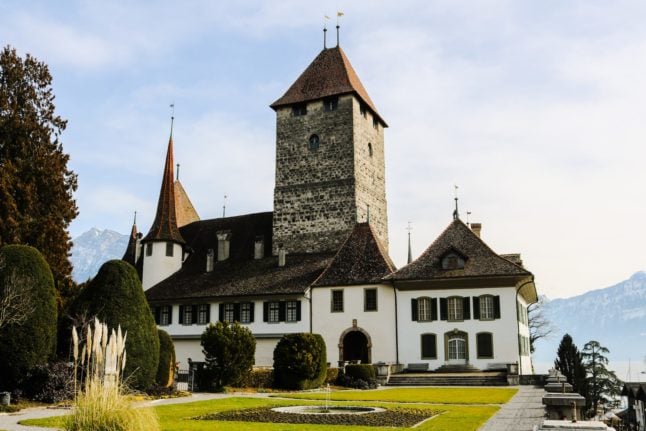 Spiez Castle in Bern. Photo by Chris Kaeppeli on Unsplash

Keep in mind that you do have to reserve in advance for external locations, with reservations generally opening about 12 months before the wedding. You may also have to be more flexible with your wedding date, as usually only one or two days per month are available for civil weddings-and it could be only on Thursdays (for example).

Summer is the most popular season for weddings in Switzerland, so those months book out fast. That being said, this is an amazing budget option for couples who can’t afford to splurge on a luxurious local; the price can be as little as 100 or 200 CHF more than the wedding at the civil office.

Depending on your income, the tax system for married couples in Switzerland could either work for you or against you.

Married couples must file their taxes together. Because those in a higher income bracket pay more tax, couples who both earn a lot can be taxed significantly more than if they paid their taxes separately.

This so-called ‘Marriage tax penalty’, lead some to believe that it makes more financial sense not to get married.

On the other hand, if one spouse earns a low income or no income, then this system may work in the couple’s favour, pushing them into a lower tax bracket.

This is of course, dependent on other factors such as the canton and municipality you live in.

One playful Swiss wedding tradition to be aware of is, that it is not uncommon for the bride and groom’s close friends and family to ‘decorate’ their apartment, garden or car for the wedding night.  The decorations are designed to be funny and annoying but harmless.

A few years ago, Swiss Radio Station FM1 Today compiled a list of some of their listeners wedding prank experiences. These included changing the doorbell ringer to the tune of popular Swiss love song ‘Ewigi Liebi’, filling the bathtub with toilet rolls or with a goldfish and filling the bedroom with balloons.

Another common tradition is for family and friends to organise sketches, skits or songs as part of the wedding party celebrations. I got married in Switzerland last August.  My husband’s Swiss cousins changed the lyrics of some Swiss and German songs to perform our love story, while at the same time throwing chocolate at the crowd.

As in any country around the world, each Swiss family also often has their own unique wedding traditions. For us, that meant receiving a Swiss cow bell engraved with our names and the wedding date on it.  During the wedding festivities, guests could ring the bell in exchange for a coin donation. Anytime we heard the bell, no matter what else was happening, we had to kiss.