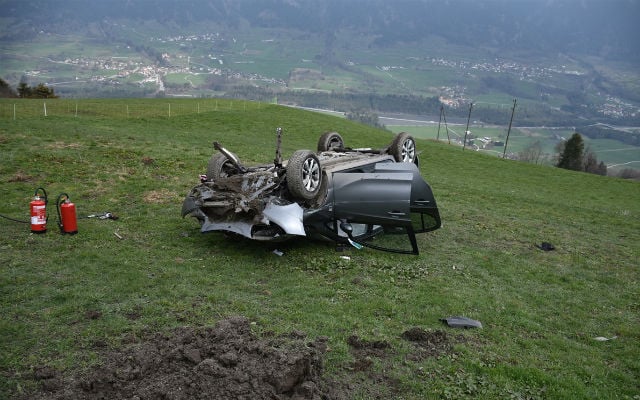 The car after the accident. Photo: Graubunden cantonal police.

The 51-year-old woman came off the road near the municipality of Sarn on the afternoon of Wednesday April 10th.

After losing control of the car on the Ausser-Heinzenberg-Strasse in Sarn, the driver drove down an embankment for 150 metres. The car then flew for 20 metres before landing on its roof, according to a statement (DE) by police in the canton of Graubunden. Rescue and emergency services vehicles below the embankment at the scene of the accident. Photo: Graubunden cantonal police.

While the car was completely destroyed, the driver miraculously was not seriously injured. She was taken by helicopter to Graubunden Hospital in Chur after being rescued by a team of 15 emergency services personnel.

The exact cause of the accident is being investigated by the Graubunden cantonal police.