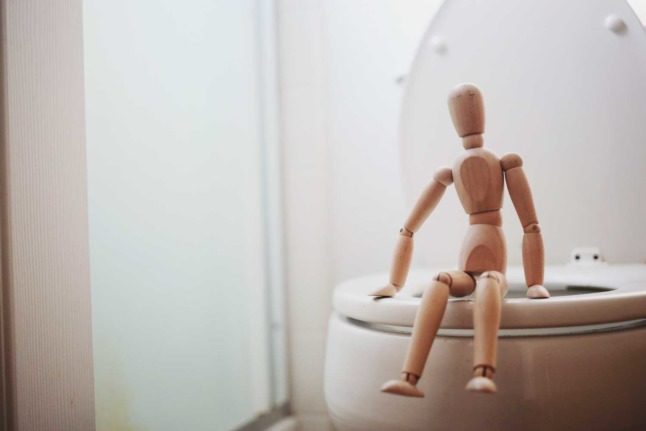 Sit down to pee and win friends. Photo by Giorgio Trovato on Unsplash

While complying with the laws is a must in Switzerland, for anyone who truly wants to ‘get’ the Swiss, they’ll need to understand these unwritten rules.

Anyone who has moved to a different country – or who has even holidayed somewhere for an extended period – will be confronted with “unwritten rules”.

These rules are sometimes more important to the locals than actual laws or regulations, but will often be difficult or impossible to discern.

In fact, you’ll probably never really feel as if you fit in until you are not only aware of these rules, but comply with them without even thinking about it.

Here are eight unwritten rules that explain how Switzerland ticks.

Off before on/out before in

This is a rule held so dearly by the Swiss that it will boggle their mind if you ask them to explain it to you.

But that’s probably because it makes complete sense, thereby satisfying the Swiss test of being logical.

When waiting for a train or an elevator, wait for those on the train/elevator to get off or out before you try and get in.

The same applies for restaurants, rooms and in toilet cubicles.

While in many Asian countries, boarding a train will feel like trying to get to the front of a Pearl Jam mosh pit, in Switzerland this is governed by an unwritten rule.

Breaking this rule is a major faux pas and could risk your social ostracism before you’ve even settled in.

Please wait for everyone to get out first before getting on the train (or elevator).

Drop the ‘pop in’

It’s perhaps no surprise that a country which prioritises planning does not like surprises, no matter how small they are.

While a surprise ‘pop in’ visit might be a nice way to remind your friends that they are on your mind, in Switzerland it will not be welcomed.

According to the authorities in the canton of Aargau, if you want to show someone you care through a spontaneous visit to show just how important they are to you, make an appointment in advance.

Politicians should be seen and not heard

This rule might sound like an absolute dream to people from 100 percent of countries on earth and it still remains one of Switzerland’s most controversial “unwritten rules”.

In Swiss parliament, new members of the Council of States (Switzerland’s upper house) are not allowed to speak or engage in debate for the first month or so of their tenure.

The idea is that they use the time to get to know the rules (written and unwritten) and etiquette of the senate before they start blabbing their big mouths off.

This has been a problem recently, for example in 2019 when 22 of the 46 members of the senate were new – thereby meaning that half of the house was not allowed to talk.

So this one might have been driven home elsewhere due to the coronavirus pandemic, but a rule held in high esteem in Switzerland is staying home if you feel even slightly sick.

In English-speaking countries, studies have shown that workers believe there is an expectation to “suck it up” and push through their illness to come to work.

Workers have said they fear they’ll be deemed to be “chucking a sickie”, even when they’re genuinely sick.

In Switzerland “sucking it up” and pushing through the symptoms will be seen as irresponsible, both for your own health and for the health of others.

These days, anyone with flu symptoms should stay home for fear of spreading Covid throughout the staff room in almost every country, but in Switzerland this has been the norm for some time.

From shopping centres to public transport, Switzerland loves an escalator.

Switzerland also knows just how to stand on an escalator to avoid escalating social conflicts.

Whether going up or down – or even straight ahead on the travelator/moving walkway at the airport – you must always stand on the right, or move forward on the left. Stand on the right. Good advice. Photo by Tom Parsons on Unsplash

This is especially prescient for people from Commonwealth and former Commonwealth countries, the opposite is done as a consequence of driving on the right.

If you’re unsure, remember to go with what everyone else is doing – usually a good idea with almost everything on this list – and you’ll be fine.

The Swiss love their privacy – and this is particularly the case in the private arena.

While in some countries it might be normal to start up a conversation while standing next to another person at the pissoir, in Switzerland that is heavily frowned upon.

Small talk is out at the best of times, but in the bathroom in Switzerland it’s a real no go.

Oh, and if you can, always leave at least one free pissoir between you and anyone who’s already there. Just do it.

Don’t stand so close to me…. pissoir protocol is very important in Switzerland.

Sitting down to pee

While we’re on the topic of number ones, a sure fire way to alienate your housemates or your partner is to pee standing up while at home.

No matter how good you think your aim is, if you stand up to pee, every bad smell and odd discolouration in the bathroom will be blamed on you for all of eternity.

In fact, sitting down to pee is so important to the Swiss that it is mandated after 10pm in some cantons, SRF reports.

While this is primarily for noise reasons – “because it disturbs the nocturnal peace and quiet by splashing around” – sitting down to pee will show your in- laws that you respect them and that you are not a savage.

Switzerland runs on punctuality, preparation and predictability – and that’s not just the public transport network.

If you can’t make a reservation at a restaurant, be sure to call and cancel. If you don’t, they’re likely to remember the fact they held the table for an hour under your name and lost business.

And if you can make it but you’ll be late, then call to let them know. It’s not unheard of that they’d give away your table after 15 minutes if the place is busy.

On that note, just try and be punctual all the time. And if you are late, even if it’s just five minutes, let the person know.