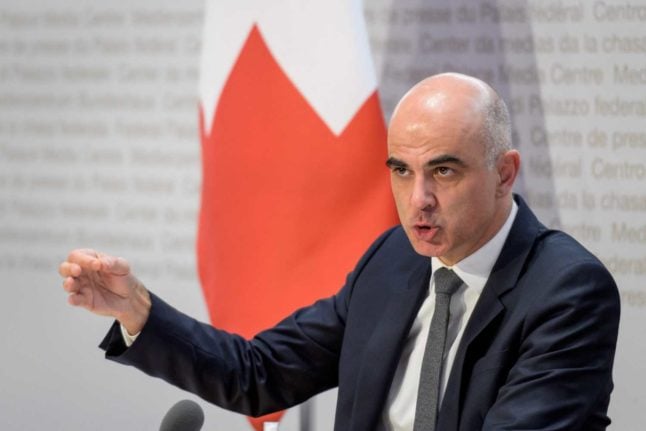 Swiss Health Minister Alain Berset said at a media conference on Thursday afternoon that further measures were not yet being considered in Switzerland, despite recording the highest infection rates this year.

Restricting indoor venues to the vaccinated and the fully recovered was not proportionate with the threat posed by the virus, Berset said on Wednesday.

Covid-19 in Switzerland: Why number of deaths among the vaccinated is misinterpreted

“The situations in the regions are very different. That is why you have to ask yourself: Is it proportionate to tighten up everywhere, even if there are major differences. At the moment everything is organised in such a way that it works with the 3G rule,” adds Berset.

3G refers to the German words for vaccinated, recovered and tested – geimpft/genesen/getestet – and has been used to describe the conditions required to take part in many activities in German-speaking countries.

A 2G rule requires that people are either vaccinated or recovered from the virus to take part in certain activities (i.e. negative tests are insufficient).

Lukas Engelberger said implementing a 2G rule off the table at present, despite similar measures being implemented in neighbouring Germany and Austria.

“A 2G rule is currently not up for discussion. The discussions take place strictly within the framework of the 3G rule that is currently in force. We do not want to discuss a system change at the moment,”

“We have very few deaths at the moment. We also notice that the vaccination protects very well. Maybe that would be the right moment again for those people who have not yet dared to take the step,” he said.

“Again: the vaccination protects 90 percent against severe disease and you have to make use of it.”

Switzerland officially approved booster vaccinations for people in high risk groups from Monday, November 15th. Booster jabs will be rolled out for the general public soon, with the end of November given as a tentative date.

Berset however indicated that tighter measures could be imposed in future depending on the pandemic situation.

“We have been living in uncertain times for almost 21 months. We are currently seeing an increase in the number of cases, but this is not an explosion.”

“As a reminder: We have already had phases in which the number of cases doubled within four days. We are now at two weeks. But it can change quickly, and then of course new measures would also be taken. “

With case rates having shot up since mid-October, the Swiss authorities fear an overload of hospital cases as the winter kicks in.

Last week, Covid-19 hospitalisations increased by a quarter, while deaths were up more than 80 percent to 53 fatalities. Intensive care units are 77 percent full, with 17 percent of the overall capacity taken up by Covid-19 patients.

Bern University epidemiologist Christian Althaus called for a return to working from home, free tests and greater mask-wearing indoors, given the surge in cases.

Althaus said that given the creeping vaccination rate — neighbours Germany, France and Italy all have higher rates — Switzerland could be in for a rough winter. “We are not out of the danger zone yet. Given the current situation, we could find ourselves once again in a critical situation by Christmas,” he said.

As part of its famous direct democracy system, Switzerland will vote on November 28 on its Covid-19 laws, including the Covid certificate for fully vaccinated, recovered or tested-negative people.

The pass facilitates international travel and entry to public events and indoor spaces such as restaurants and concert venues.

The landlocked European country, population 8.6 million, has recorded nearly 931,000 positive tests — with nearly 6,000 more added on Thursday — and 10,926 deaths during the pandemic.