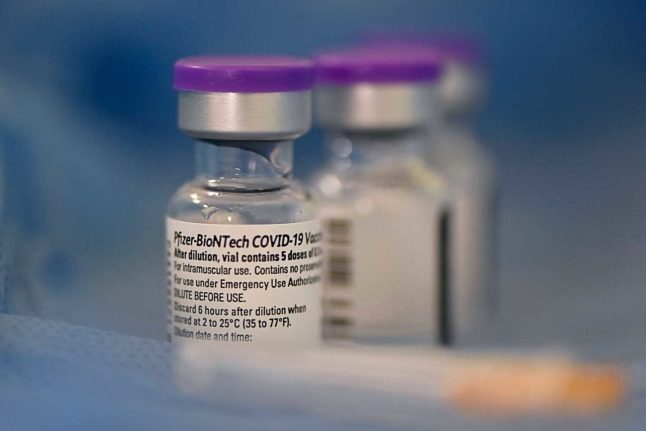 Covid booster shots will be rolled out in Switzerland from November 15th. Photo: Luis ACOSTA / AFP

Booster shots have been approved for everyone aged 16 and over in Switzerland, although shots are not as yet being administered on a widespread basis.

When were booster shots approved in Switzerland?

Switzerland on October 26th announced that Covid booster shots would be administered from November 15th onwards for people in risk groups, i.e. those over 65 and with medical conditions which make them vulnerable to Covid.

Boosters for people in risk groups were administered from Monday, November 22nd onwards.

On November 23rd, Swissmedic extended the approval to everyone over 16.

However, as at end November, only one canton – Graubünden – has started administering booster jabs, doing so from November 29th.

Switzerland came under fire for stalling on booster shots, which are already being administered in several other countries including the United States, Austria, Germany and Israel.

Patrick Mathys, head of the crisis management at the Federal Office of Public Health, previously said that there was “little evidence regarding the benefits of a booster vaccination for everyone.”

Covid-19: Why is Switzerland still stalling on booster shots?

In order to get a booster, you must have had your second shot at least six months ago. As at end November, people in high risk categories and those over the age of 65 can get a booster shot to improve their immunity.

As the responsibility for administering vaccinations is a cantonal responsibility, whether you can get a booster will depend on your canton.

But wait, I thought people were already getting booster shots?

Yes, you’re right. Some people who are in very high risk categories have been getting booster shots in Switzerland for some time.

This was however only done on an ad hoc basis and not as part of a widespread campaign – and was not offered in all cantons.

What is ‘high risk’?

There are three broad categories of high risk.

The second is people who have overcome previous illnesses which have a connection with the lungs, or others such as diabetes and cancer.

The third is people with immunosuppressed conditions, who do not have enough protection from being fully vaccinated. People in this category have already been vaccinated in Switzerland for some time, with Swissmedic confirming that 7,700 have been administered in Switzerland as at October 26th.

I’m not in a risk category: Do I need a booster?

The main reason Switzerland delayed on approving boosters was because Swissmedic wanted to gather more information on the effectiveness of booster jabs.

When making the announcement, a spokesperson for Swissmedic said there was no reason for those not in risk categories to get a booster shot, with all evidence suggesting they have full protection.

On November 15th, Swiss media published information from a leaked report saying that booster vaccinations would soon be recommended for the general public.

READ MORE: Switzerland set to approve booster shots for all amid surge in infections

You can get your booster jab in the same way you got your first and second dose.

Booster shots are administered by the canton in which you live.

Do I have to get the same vaccine as I did previously?

Almost all of those vaccinated in Switzerland would have been vaccinated with either one of the two mRNA jabs: Moderna or Pfizer/Biontech.

As it stands, the Swiss government has not specifically said whether people should get the same jab as a booster.

However, so far the Swiss vaccination system has operated according to a homologous vaccination scheme – i.e. that you are vaccinated with the one manufacturer – so it is likely this will be continued with the booster shot.

Do I need to do an antibody test in order to get a booster?

No. Boosters are administered on the basis of risk status only.

Some readers have however told us that they have been asked to do an antibody test in order to determine if they need a booster, this is not official government policy.

Switzerland is however considering whether antibody testing should be rolled out to see if people have ‘recovered’ from the virus.

Are healthcare workers eligible for booster vaccinations in Switzerland?

No. As it stands, Swissmedic believes fully vaccinated healthcare workers are not at particular risk of contracting the virus, unless of course they can be said to be in one of the other high-risk categories.

This is likely to cause some consternation among healthcare workers.

Nurses and other frontline workers were among the first to be inoculated in Switzerland at the beginning of 2021 when the Covid vaccine was rolled out, they now want to be the first to receive the third dose when it is made available.

As at end October, Swiss authorities were developing a recommendation for healthcare workers, reports Swiss news outlet Watson, so this recommendation may change in future.

Does the booster shot extend the validity of my Covid certificate?

Yes. Despite some early confusion, Switzerland confirmed on October 27th that booster shots will count towards the Covid certificate.

The validity of your Covid certificate will last for one year after the booster shot.

Currently, the expiration date of certificates issued to fully vaccinated people is exactly one year after the second dose. Where you have a booster shot, the 365-day period will start from the third dose.

Why is there confusion over booster shots and Covid certificates?

Much of this confusion was self inflicted, with Switzerland initially saying that the booster shot wouldn’t extend its validity, before backtracking to say it would.

Christoph Berger, head of the Federal Commission for Vaccination Issues, said on Wednesday October 27th that boosters will extend the certificate’s validity for another 365 days (from the date of the booster shot).

Swiss authorities had previously said that the booster shot would not extend the validity of the Covid certificate, because they were concerned people would get boosters only to extend the certificate’s validity even if they didn’t need boosters.

How do I get a Covid certificate with a booster shot?

You will get your Covid certificate at the place where you get your booster shot.

You can then feed it into the app.

UPDATED: A step-by-step guide to getting the Swiss Covid certificate