School holidays: Where are Switzerland's traffic and airport delays the worst?

Part of Switzerland has already started its summer vacations, with other regions beginning theirs this weekend. If you are planning to drive or fly to your holiday destination, expect disruptions.

July marks the start of summer holidays not only in Switzerland, but also in Germany and the Netherlands.

As a result, Switzerland's airports and roads are set for significant problems in the coming days.

Here's what you need to know.

Traffic jams are “virtually certain” on the north-south axis in front of the two portals of the Gotthard tunnel”, according to Viasuisse traffic monitoring group.

But the bottlenecks are not limited only to the south-bound traffic via the Gotthard. Other Swiss motorways are impacted as well. They typically include:

READ MORE: The roads and dates to avoid driving in Switzerland this summer

What causes further disruptions to the already intense traffic situation are events scheduled for the summer months in various Swiss cities and communities, all of which involve closures of streets and sometimes lengthy detours.

The traffic congestion will be particularly problematic in the southwest of the country, due to a number of prominent events and festivals.

The famous festival is attended by tens of thousands of spectators, which means that traffic on the A9 motorway will be heavier than usual, especially in the vicinity of the Montreux exit, from about Vevey in the west and Villeneuve in the east

Access by car to any part of the Swiss route will be difficult if not impossible, as all the roads will be closed to traffic.

The Lausanne-Sud motorway, as well as the UNIL-EPFL, Malley and Maladière entrances and exits will be closed to traffic until 6pm on Saturday.

While A1 / A9 / A12 motorways will remain open in Vaud, Fribourg and Valais, congestion should be expected near exits to Aigle and toward Cully, Vionnaz, Châtel-St-Denis, Bulle, Les Moulins, Les Mosses, Col de La Croix, and Morzine.

A comprehensive overview of where the Tour de France will run through Switzerland is available here.

The annual rock event takes place in a field near the town of Nyon in Vaud.

As it lies on the usually busy segment of the A1 near Geneva, traffic on the motorway will be dense, from the Gland exit in the east to Coppet in the West.

Generally speaking, traffic will be more congested on the roads leading up to popular events and festivals like those listed above.

This 2022 traffic calendar from Motoring organisation Touring Club Suisse will give you a general idea of when and where the busiest travel times are: 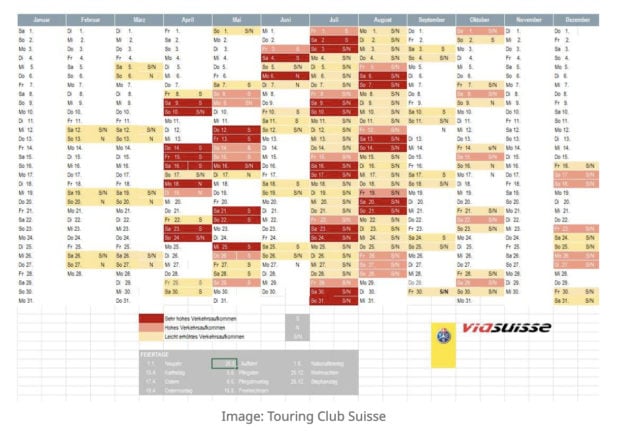 READ MORE: What is Switzerland’s ‘traffic calendar’ and how can it help me save time?

The ongoing problem of personnel shortage and other post-Covid operational difficulties mean that leaving for holiday from an airport will not be a smooth process.

In coming weeks “between 80,000 and 90,000 passengers a day will be flying to and from of Zurich", airport officials said.

Therefore, “travellers are advised to leave enough time for their journey and arrive at the airport up to three hours before their flight's departure time. At certain peak times, passenger volumes at Zurich Airport are reaching pre-Covid numbers. Longer waits can be expected at times".

In Geneva, the airport "was stormed” by about 100,000 holidaymakers on July 2nd and 3rd, and the same situation is expected to continue throughout the summer, though the daily numbers are likely to be lower.

While Geneva’s airport is smaller, both in size and the number of flights, than Zurich, it serves passengers from Switzerland as well as neighbouring French regions, so it basically "handles" passengers from both countries.

For its part, the Euro-Airport in Basel also expects longer queues at peak times but looks forward to coming weeks “with cautious optimism”.