How foreigners are changing Switzerland

Switzerland is often referred to as a ‘tiny’ Alpine nation. It certainly is tiny in comparison to most other European countries, but its population has been growing lately — thanks to foreigners. This is what lies ahead.

Swiss media, including The Local, reported recently that around 200,000 immigrants will move to Switzerland in 2022, pushing the total population close to 9 million.

At the end of December 2021, Switzerland’s population stood at 8.74 million people, according to provisional figures from the Swiss Federal Statistical Office (FSO).

However, by the beginning of July, 100,000 more people were registered in Switzerland.

While Ukrainian refugees constitute the bulk — 60,000 people — of this growth spurt, 32,700 immigrants from other countries also came to Switzerland in this period, along with 6,800 asylum seekers, according to reports.

However, these numbers should not be taken at face value, as there are many nuances at play here.

Population statistics are based on the number of permanent residents living in the country, Johanna Probst, FSO's group leader at the demography and migration unit told The Local in an interview.

"Right now, Ukrainians are counted among the non-permanent resident population ", she said, adding that these refugees wouldn't be statistically considered as "permanent" until one year after their arrival.

"It is difficult to predict how conflict-driven migration flows will evolve", Probst said.

About 80,000 more Ukrainians are expected to come to Switzerland this year.

This doesn’t mean, however, that everyone presently here or still to come, will remain in Switzerland long-term; in fact, the government expects Ukrainians to return home once the war is over, according to Justice Minister Karin Keller-Sutter, though the date of the ceasefire or the number of refugees who will actually go back is hard to predict.

So it is feasible, according to some projections, that there will be close to 9 million people in the country by the end of this year, at least temporarily.

According to the FSO population projections based on demographic trends observed in the past, Switzerland's permanent population will likely reach 9 million in 2026.

This is a detailed provisional data on the permanent population in 2021 by canton, citizenship, sex and age, which gives a good overview of the current situation.

How are Switzerland's demographic shifts determined?

Different sets of data are used to observe the country's demographics, according to Probst.

They include the migration balance — that is, the number of people immigrating to Switzerland against those leaving the country — as well as comparing the births versus deaths.

"The number of births is higher than the number of deaths", she said, which tips the scales toward population increase.

The birth rate, however, is currently "below the treshold": 1.5 children for each woman residing in Switzerland, while the number required for replacing the parents’ generation is currently is 2.1 children per woman.

Since the population of Switzerland is living longer and there are more retired people now than decades ago, the labour market needs "fresh blood", so to speak.

Immigration compensates for these gaps, with foreigners being over-represented among the 25 to 55 age group, Probst said.

This is what Switzerland's foreign population looked like in 2020 — trends that are still valid today, according to Probst. 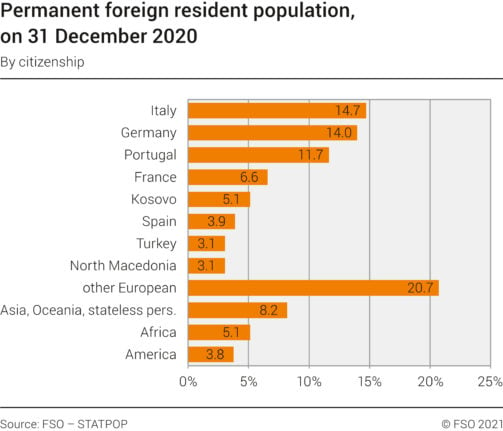 While third-nation citizens don’t constitute a large immigrant group because their residence and employment in Switzerland is subject to strict regulations, Switzerland also has a sizeable population from Kosovo, as well as from the UK — about 40,000 people for the latter.

As far as asylum seekers are concerned, the additional 6,800 who came to Switzerland this year are, as is the case of those already here, mostly from Afghanistan, Turkey, Eritrea, Algeria, and Syria.

Statistics indicate that 22 percent of asylum applications are rejected, which means some applicants will not be living here long-term.

"From a general point of view, the demographic evolution is anticipated. Switzerland has been in a situation of uninterrupted demographic growth for several decades, and this is explained in particular by the arrival of young migrants, who also contribute to the Swiss birth rate", Philippe Wanner, professor at the Institute of Demography and Social Economics at the University of Geneva, told The Local.

He added that "although the figure of 9 million may seem symbolic, from a long-term point of view we are in a rather favourable demographic situation: the current Swiss economy favours immigration, which slows down the ageing of the population and makes it possible to balance the social security system financially".

What are the implications of the growing population — both non-permanent and permanent?

But there are other challenges as well.

"Municipalities are already reaching the limit of their possibilities, in particular to find teachers for approximately 14,000 Ukrainian children in schools", said Stefan Wolter, professor of economics of education.

From the positive and more sustainable point of view, immigrants  are not only boosting Switzerland's workforce and labour market, but they are also contributing to the social insurance system — both of which are beneficial to the country's economy.