Uneven increases in electricity prices, Swiss citizenship trends, and other news in our roundup on Friday.

Electricity costs will go up, but not everywhere by the same amount

It is certain by now that energy will become more expensive in Switzerland, but the exact increase depends on several factors, including when local electricity companies purchased their supply, their pricing strategy, and whether suppliers produce the electricity themselves or have to import it.

“Unlucky are those whose supplier has to buy the electricity. Prices have exploded in the market and these costs are passed on to the customers, according to a report in Blick.

As a general indication, based on a survey the Association of Swiss Electricity Companies conducted among its members, of the 100 companies that responded, half will increase the price of electricity by 30 percent or more over their current rates.

A new population study released by the Federal Statistical Office (FSO) on Thursday shows how the acquisition of Swiss citizenship has changed over the past two decades.

As the FSO chart below indicates, the number of Germans, French, Portuguese, and other Europeans has grown, while that of Italians and people from outside  Europe has fallen. 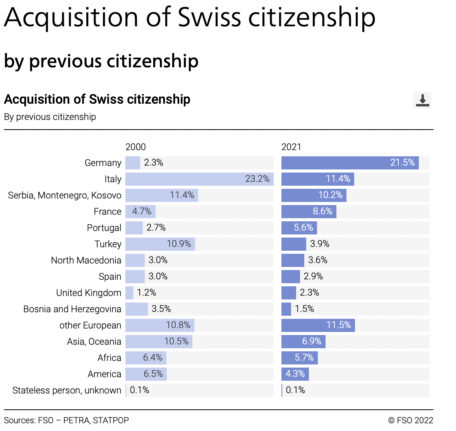 Some prices fell in July, others went up

The strong franc, the increase in the key interest rate, and seasonal factors such post-summer discounts “stabilised consumer prices in July", according to a consumer price index that a Swiss comparison site, Comparis, released on Thursday.

"The costs for PET, as well as for production and transport, have risen and so have the prices for consumers”, said Michael Kuhn, consumer finance expert at Comparis.

On the other hand, fuel prices are no longer among the top five goods that have become more expensive”, Kuhn said.

Zurich to hold its annual swimfest on Saturday

The event is back after a two-year pause due to COVID.

The Limmatschwimmen is the only time when people are allowed to swim in this particular section of the Limmat river — from the Frauenbad to the Oberer Letten pools.

It traditionally starts with the swimming competition at noon, followed by all the people who want to swim for fun.

The event was originally scheduled for last Saturday but had to be postponed due to the low water level caused by the drought. Tomorrow, however, conditions “promise to be good”, organisers say.

A number of tickets, out of 4,500 in total, are sill available. The price, ranging from 25 to 42 francs, depends on whether you bring your own waterproof swim bag or need to purchase one.

Information on where to buy tickets can be found here.