REVEALED: The most affordable places to buy a home in Switzerland

Property prices remain high in Switzerland. But there are certain municipalities where snagging a place to live is more affordable.

There's no doubt that buying a home in Switzerland is an expensive business. And even with higher mortgage interest rates this year, property costs have continued to rise, at least in the third quarter of 2022.

According to the authors of a study by Raiffeisenbank Switzerland, the main reason for the increase is the "extremely scarce supply".

The demand for residential property has reduced slightly due to the expectation of higher financing costs, according to the bank.

However, supply remains so tight that the decline in demand from an extremely high level is not yet strong enough to break the price momentum in the home ownership market.

READ ALSO: What's the outlook for the Swiss property and rental market in 2023?

However, even in the midst of high prices there are exceptions. An analysis by Swiss newspaper NZZ and real estate service provider Wüest Partner found that there are still affordable options for prospective buyers if you consider the location carefully.

The analysis looked at which municipalities in Switzerland would-be buyers can find the lowest average prices for an average condominium with 125 square metres of living space.

Wüest Partner identified the five municipalities per Swiss canton with the most favourable average asking prices for condos.

Not surprisingly, the cheapest properties were in rural communities.

First and foremost in Le Locle in the Canton of Neuchâtel. Bargain hunters here can find a flat for as little as CHF 420,000.

In St. Niklaus, the cheapest municipality in the Valais, an average flat with 125 square metres of space costs CHF 433,000.

Municipalities in the canton of Bern follow closely behind. Here, 125 square metres of living space still costs less than half a million francs in some villages. In Moutier, for instance, the average asking price is 486,000 Swiss francs.

In Jura, properties are generally advertised at over half a million francs. In Courroux in the district of Delémont, for instance, the average asking price for a 125 square metre apartment is CHF 508,000.

Small mountain villages with fewer than 2,000 inhabitants were excluded from the survey due to the small number of properties sold.

The closer you get to large city areas, the more expensive it becomes.

In Riehen, in the canton of Basel-Stadt, a 125 square metres flat costs 1.29 million Swiss francs. Buyers in Puplinge, Geneva, have to dig deep into their pockets too, with average asking prices of around 1.28 million. And in Menzingen, Zug, an average flat of the same size also costs well over a million.

READ ALSO: How much do you need to earn in your Swiss canton to be well off?

Anyone looking for affordable residential property in the canton of Zurich has to move far away from the city. The cheapest condos are in the Zurich Oberland area, in communities like Fischenthal, Stammheim, Wila, Wald or Elgg. But even here, prices range from 700,000 to 800,000 francs. 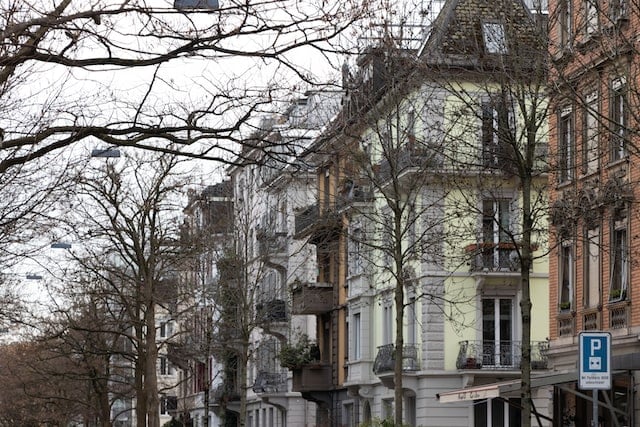 Flats in Zurich, Switzerland. People have to look outside bigger cities for affordable property. Photo by Vincent Dörig on Unsplash

The average condo costs CHF 713,000 in Fischenthal and 790,000 in Stammheim. By way of comparison: in the "cheapest" Zug municipality of Menzingen, a comparable flat costs over 1.15 million.

According to Wüest Partner, property prices have more than doubled in Switzerland on average since 2000. In most regions of the country, you have to shell out at least a million francs to be able to afford a house with a garden.

"A lack of building land is one of the main drivers behind the strong price increases during the last few years," said Robert Weinert, Head of Real Estate Monitoring at Wüest Partner.

According to the Federal Statistical Office average wages have only risen by a quarter in the same period. According to a Swiss Life survey, only around a third of all Swiss households have the money needed to buy an average single-family home.

READ MORE: Where in Switzerland are you most likely to find flats for rent?

Other costs to consider

In addition to the price of a property, there are other factors to consider, such as the tax rate. For example, a flat in the low-tax canton of Zug is considerably more expensive than in Aargau. But this extra price is put into perspective over time if you can save several thousand francs in taxes each year.

A long commute to work, non-existent or expensive childcare and different health insurance premiums should also be considered as cost factors in the long term when buying a property.