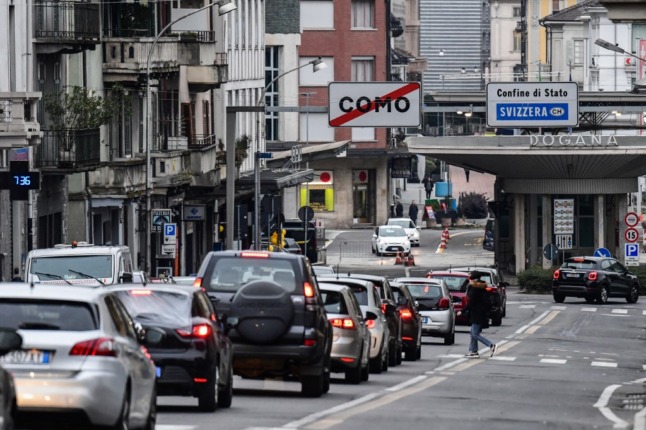 Cars line up at the border to cross into Switzerland from Italy. Photo by Miguel MEDINA / AFP

Remember Covid, the virus that made news before Russia’s invasion of Ukraine grabbed the world’s attention?

After reaching the peak in January, then falling and stabilising for a while — prompting the Federal Council to scrap nearly all health measures — the number of new infections in on the rise again.

From just over 16,000 on Monday, the number jumped to 23,684 yesterday, according to data from the Federal Office of Public Health.

At the same time, the number of Covid-related ICU admissions has also gone up slightly — from 127 on February 28th to 135 on March 1st.

Depending on the further evolution of the epidemiological situation throughout March, the Federal Council will decide whether to lift remaining Covid rules — masks on public transportation and in health establishments, as well isolation obligation for infected individuals — from the end of the month.

As the Chernobyl nuclear reactor in Ukraine is now under Russian control, sparking fears of a nuclear catastrophe, Swiss pharmacies are registering higher demand for iodine tablets.

This medication is believed to prevent radioactive iodine from accumulating in the thyroid gland and causing thyroid cancer.

“If you now swallow two iodine tablets every day, it can lead to dysfunction of the thyroid gland”, he said.

He recommends following the instructions of the authorities. In the event of an incident and heightened risk, the National Emergency Operations Centre would disseminate instructions to the population on how to behave and what medications to take.

Russians in Switzerland try to ditch their passports

As the EU is now banning banks from dealing with Russian clients, and Swiss authorities are following these rules, Russian nationals in Switzerland are “desperately trying to free themselves from the ever-tightening vice of sanctions. They distance themselves as much as possible from their homeland”, according to a report in Tribune de Genève.

“Many wealthy Russians have multiple passports and have now requested to no longer be registered with the bank as Russian residents, but to be registered at another [EU] domicile”, the manager of one wealth management institution told the newspaper.

“Each of these residency transfers is reviewed by a compliance committee. People whose names are on the sanctions list have no chance of getting their money back. No bank wants to be censured for violating sanctions”, according to the report.

In future, Switzerland will retain 80 percent of the withholding taxes levied on the income of Italian cross-border commuters. After the Council of States, the National Council also gave the green light for the ratification of a corresponding tax agreement.

This provision applies to persons who work or have worked in the cantons of Ticino, Graubünden or Valais between December 31st, 2018 and the entry into force of the new agreement. These cross-border commuters continue to be subject exclusively to taxation in Switzerland until the end of the tax year 2033.

In return, Switzerland will pay the Italian border municipalities financial compensation amounting to 40 percent of the withholding tax it levies. The governments in Bern and Rome are convinced that the new agreement will significantly improve the regulation that dates back to 1974.

This agreement will apply to some 87,000 people from Italy who are employed in Switzerland.

This link provides more information about taxation of cross-border commuters.

READ MORE: Switzerland: Cross-border workers may be penalised for working from home