Verdict: The downsides of Zurich you should be aware of before moving

Switzerland’s economic engine. Superb public transport. Perhaps the safest and cleanest metropolis in Europe. It can appear that Zurich has it all. But there are of course some downsides. Here's what our Zurich-based readers told us.

Zurich city is home to more than 400,000 people - or around 1.5 million when the entire canton is taken into account.

Around one third of the residents are foreigners, which is higher than the 25 percent figure for Switzerland as a whole.

As Switzerland’s economic engine, Zurich is responsible for roughly a fifth of the country’s GDP and is the base for dozens of well known domestic and international companies.

The Zurich job market is strong - perhaps the strongest in Switzerland, particularly for international workers.

REVEALED: Which Swiss cities offer the best quality of life?

Wages are also strong as a result, with salaries in various industries among the most competitive in the country.

However, there are of course some downsides to be aware of. In early July, we reached out to our readers to get the lowdown on some of the biggest downsides of living in Zurich.

This is what they told us.

READ MORE: The downsides of Geneva you should be aware of before moving there

In total, 88 readers got back to us to tell us how they felt about living in Zurich - and in particular what were the major downsides.

Somewhat expectedly, the cost of living was the major concern of those who took the time to respond. 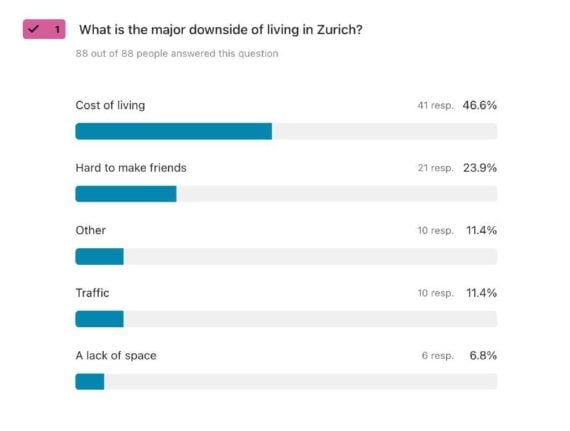 Almost half of the respondents said cost of living was the major downside of living in Switzerland's largest city.

Just under a quarter told us that difficult making friends was their major concern, while one in ten said the major issue was traffic.

Six respondents - around 7 percent of the total - told us that a lack of space was the major downside.

Finally, 11.4 percent of respondents ticked the 'other' box before going on to elaborate that finding a flat, the rudeness of the locals, and other issues like language were the major downsides.

We also had a large number of respondents to our other multiple choice question: i.e. are the downsides enough to make you leave.

And while people were ready to point out what Zurich was doing wrong, a large majority - just under 80 percent - told us they weren't being pushed out the exit door.

Just under 15 percent said they were on the way out, while seven percent told us they had already left. 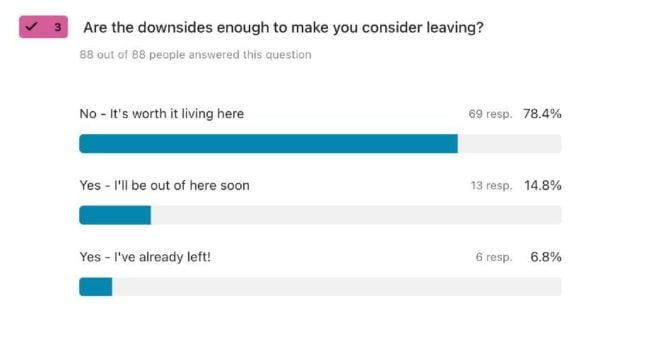 We also asked readers to give us specific info about the nature of the downsides. Here's what they said.

One major struggle is finding rental accommodation in Zurich, which continues to get more difficult.

Even for people with higher salaries, Zurich’s popularity - and the popularity of renting as opposed to buying - means that there is a significant amount of competition for apartments in the city and its surrounds.

Renting a three or four-room apartment can cost you upwards of CHF4,000, which is going to represent a fair chunk of your salary.

One reader complained that "a normal size flat costs twice a full-month salary of another country", which sounds about right based on the above figures.

Another hurdle are the documents required for the tenant selection process, which can be difficult to obtain - particularly for people from elsewhere.

One reader, Patata, said "finding a flat/bedroom is a nightmare".

From Aargau to Zug, Switzerland is expensive - but the costs of living are particularly high in Zurich. Zurich continually tops lists of most expensive cities in the world and ranks alongside Geneva as Switzerland's priciest.

While the high wages in Zurich - school teachers earn upwards of CHF80,000 per year and cleaners can earn more than CHF30 per hour - offsets this somewhat, but overall you'll be guaranteed to spend plenty if you want to maintain even a basic quality of life in Zurich.

Ben, who has lived in Zurich for four years, said prices were artificially inflated by the number of incredibly wealthy people in the city.

"I think that the fact that there are so many wealthy people means that prices increase to levels that, while easily affordable to the extremely wealthy and affluent populations, are not to the average resident."

One thing we heard from our readers - particularly our Latin American or Mediterranean readers - is how reserved the culture can be in Zurich.

While we will reduce the temptation to double down on our inner Besserwisser and remind you that the culture is much more open in Zurich than pretty much anywhere else in the country, we do understand that Zurich can be a lot more conservative than other international cities like Berlin, London, New York or Madrid.

Switzerland itself trends relatively conservative - same-sex marriage was only legalised in summer 2022 - and Zurich attitudes are a symptom of that, although as we said the attitudes are much more open than pretty much anywhere else.

Peter told us the close-minded nature of the locals was enough to make him give up on making friends.

"Trying to get to know anyone seems like a wasted endeavour. It's a vicious circle of people not caring enough to keep building a friendship, then getting jaded so you don't bother anymore. There's little spontaneity with Swiss people. You have to arrange to meet up over a week in advance. That's not common elsewhere in my experience." 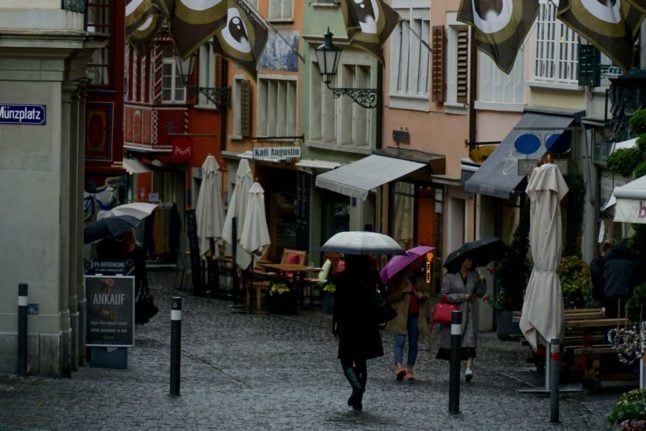 Many respondents told us they were lonely in Zurich. Photo by Angel Barnes on Unsplash

One of the most common bits of feedback we get at The Local about Switzerland is how difficult it is to make friends.

This can be a little easier in larger cities such as Zurich, although by and large you'll be making friends with fellow foreigners.

A study looking at which cantons were the friendliest ranked Zurich slightly less friendly than the national average, but better than several other cantons including Geneva.

One reader told us the "unfriendly, insular, bitter, stuck up locals" were enough force a departure from Zurich after four years.

Noah agreed, saying it was not only hard to make friends with locals, but also with expats.

"People are closed, hard to make new friends and have deep conversations (not just with locals, most expats are weird too)".

The Swiss who grow up in Zurich often have their own friend circles and don't mix too much with the city's internationals.

Part of this is because of the high turnover of foreign residents, with many locals not wanting to have a revolving door of friendships.

One reader, Ato - who has been in Switzerland for 5.5 years - recognised this.

"Due to the transient nature of many people living here, friendships sometimes seem to not be worth investing in. The Swiss themselves have seen this and generally stay away from foreigners knowing that many of them will leave."

No friends and sky-high costs: The downsides of Switzerland

For arrivals from the United States, Australia or other countries with a car culture, it can be a surprise to see how few Zurich residents commute with a car - and how few actually own a car at all.

The canton's great but expensive public transport networks mean that most travel within the canton itself is relatively simple, with cars only making sense when travelling further afield.

This can however be a disadvantage for people who are particularly attached to their cars or others with children or mobility issues.

Those who do own a car however complain about the city's traffic, which can get jammed at peak times.

As Zurich is several centuries old, the city's infrastructure was not designed around the car - which means that pedestrians and public transport users can be prioritised when it comes to new investment and urban planning.

The result is that drivers can sit for upwards of two hours in traffic a day, while commuters and cyclists barely notice a thing.

Mint told us Zurich's crowded streets and difficult traffic reminded her of her hometown of Bangkok.

Pro tip: if you want to save money, time and stay in shape, get a bicycle - although even that can be tough in Zurich. 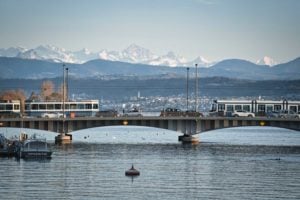 Traffic was identified by Local readers as a major issue if living in Zurich. Photo by Sergei Zhukov on Unsplash

Several respondents told us that a major disadvantage of living in Zurich was that very little is open on Sundays.

From supermarkets to fashion stores, if you want to go shopping on a Sunday, you're likely to be disappointed.

However, this is standard across Switzerland - and in fact Zurich gives you your best shot of Sunday trading, as many villages throughout the rest of the country will resemble ghost towns on Sunday.

Therefore, while this may be a downside for many of you, it won't get any better should you head elsewhere in the Confoederatio Helvetica.

Why is everything in Switzerland closed on Sundays - and what can you do instead?

A lack of space

Just under seven percent of our respondents said a lack of space was a major issue in Switzerland, which was especially problematic when it came to housing.

JC told us "buying a house is expensive and limited due to land availability", which is perhaps why the popularity of commuting is so high.

MAPS: The best commuter towns for working in Zurich

While Zurich is by all means an international city, the official language is Swiss German.

Swiss German is a largely spoken language which can be difficult to master, even for native German speakers.

Nicholas told us this effectively meant foreigners had to learn two languages.

"Having to learn both High German for formal communications and Swiss German for social interactions. Almost nobody is able to accomplish this."

When it comes to learning Swiss German, living in Zurich however is very much a double-edged sword. On the positive side of the sword, you can definitely get by with English in much of the city and the greater canton itself.

SH told us foreigners had little hope without learning German.

"Extremely reserved and don't care much if you don't speak German. They help you if you need but they don't let it go beyond."

On the negative side (of the same sword), this means that you are unlikely to be put in situations where you have to speak it - and as a result years can go by without any significant improvement.