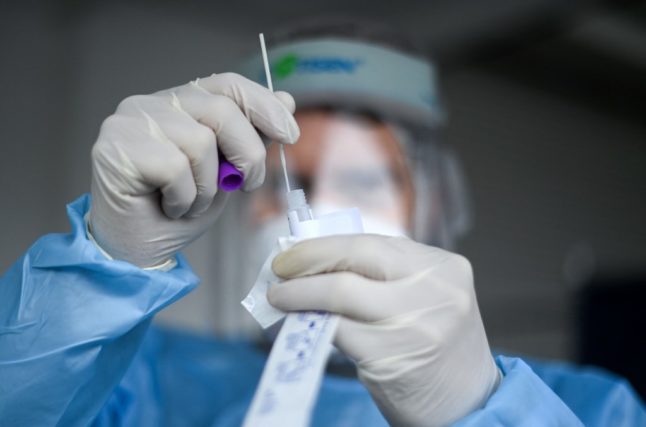 With the vaccine campaign still yet to fully click into gear, the centrepiece of Switzerland’s coronavirus strategy remains testing.

Since the middle of March, coronavirus tests have been made free in almost every case, while free ‘self tests’ have been available at Swiss pharmacies since April 7th.

Then there’s the PCR tests – which usually involve a deep nasal excavation – which are considered to be the most reliable.

But what are the differences between the tests? And which tests are accepted where?

The first tests made available in Switzerland for coronavirus – and probably the best known – are the PCR tests.

PCR stands for polymerase chain reaction. These tests look for genetic material of the virus and can also detect fragments of the virus if you are no longer infected.

With the PCRs, the result is generally available within 24 to 48 hours.

Then there are the ‘antigen tests’.

Both rapid tests and self tests are antigen tests as opposed to PCR tests. This means that they do not look for traces of the virus’ genetic material, but can detect its surface characteristics.

Neither are as accurate as a PCR test. Particularly, if you have just become infected, the antigen test might not come back positive.

For this reason, for official results, PCR tests are preferred. In most cases, when you test positive via an antigen test, you will then need to take a PCR test to confirm (and in other cases you’ll be told to stay home and isolate).

What are the rapid tests?

If you’ve been paying attention to the news recently, you’ve probably heard lots of talk about rapid tests and home tests/self tests.

There are similarities and differences between these two types of testing.

Rapid tests are antigen tests which are conducted by a trained professional – for instance a doctor, a nurse or someone at your local pharmacy – who takes a swab from deep inside one’s throat, a somewhat tricky procedure to get right.

Results are available after about 20 minutes.

When these tests were made widely available in Switzerland in autumn of 2020, the government said it was aware that they were less accurate.

However, the rapid tests “will make it easier to access testing and allow more people to be tested. This will enable more positive cases to be detected sooner”, FOPH said.

What are self tests?

One of the strategies of free testing, focusing on curbing the spread of infections and preventing new outbreaks, is that each Swiss resident will be entitled to five free coronavirus ‘self-tests’ per month.

This was announced in March and the tests became available in April in pharmacies across the country for home use.

READ MORE: Everything you need to know about Switzerland’s free coronavirus tests for every resident

They a sample from the front of the nose instead of the larynx, making them more comfortable and easy to use.

They rely on you taking a swab from the front of your nose or mouth and placing it on the test kit. The result will be available fifteen minutes later: one stripe on the kit is a negative result, two stripes is positive.

Yes, although they have been popular so stocks aren’t guaranteed.

In order to pick them up, you will need to present your healthcare card.

What is the point of the self tests?

The Swiss government has repeatedly said that a negative self-test result does not mean people are now free to ignore the rules on contact restrictions.

It adds that a result should only be considered valid for a single day.

The major motivations for the self-tests is to get a quick and accurate idea of how the virus is spreading throughout the community and to encourage infected people to isolate so that infection chains can be broken.

At this stage, testing negative does not give someone the permission to do certain things such as visiting hairdressers or restaurants, although such a plan is in development and will likely be implemented in future as part of an ‘immunity passport’ scheme.

‘Green pass’: Everything you need to know about the coronavirus immunity card in Switzerland

What about travel and quarantine?

Testing negative does however give you certain permission with regard to travel and quarantine.

For instance, you may be allowed to leave quarantine earlier after testing negative, while you will also need to show a negative test result in order to enter Switzerland.

Not all tests are treated equally however, with airport officials preferring PCR tests in many cases. Antigen tests will be accepted in some instances – but usually within a shorter time frame.

The following guide highlights which tests will be accepted in which circumstances.

How much do the tests cost?

At a cost of roughly CHF1 billion, the government has promised to cover the costs of the tests in the majority of cases.

This means all residents of Switzerland can get tested free of charge, even if they  have no coronavirus symptoms.

If you need a PCR test because you have Covid symptoms, or if you were ordered by a doctor to get screened, the test will be free as well.

However, if you request a PCR test to be able to travel, you will have to pay for it yourself, according to the Federal Office of Public Health.