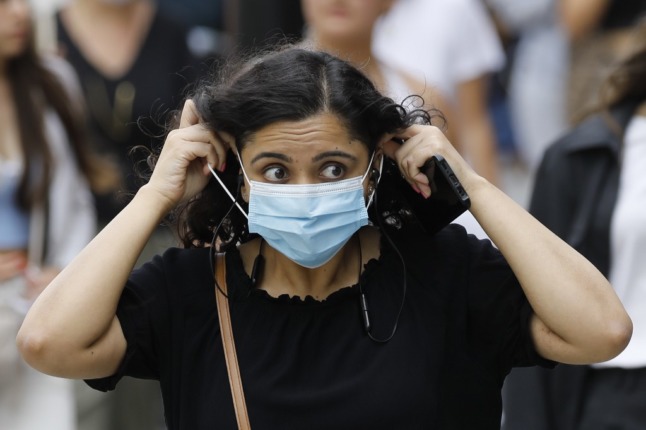 The evolution of pandemic in Switzerland is uncertain. Photo by Photo by Tolga AKMEN / AFP

However, a question arises as to whether Switzerland has been acting too quickly and rashly, especially in comparison to many other European countries that have taken a slower and more measured approach.

This is an especially pertinent question, considering the historic evidence: in the summer of 2020, after the first wave of infections started to decline, the government re-opened much of the economy.

The infections started to soar soon after, morphing into the second wave by the fall.

Health Minister Alain Berset admitted in December that the government made mistakes in managing the pandemic. “We were too lax and far too optimistic”, he said.

How can we be sure authorities are not being too lax and optimistic now?

The decision to re-open was made based on the positive epidemiological situation in the past weeks — fewer infections, hospitalisations and deaths —attributed in large part to vaccinations.

The figures in the weekly report of the Federal Office of Public Health (FOPH), which cover the period between June 14th and 20th, also indicate a positive evolution: the notorious Delta (Indian) virus accounts for only 3.8 percent of all detected infections, with the other variants ranging from 0 percent to 0.9 percent.

But does all this mean that the risk of the fourth wave of infections no longer exists, and Switzerland can rule out any threats posed by existing and potential highly contagious Covid variants?

The government is considering a scenario in which Covid would spread among unvaccinated people, possibly combined with a wave of seasonal flu.

The end of September or the beginning of October could  become “complicated”, according to Health Minister Alain Berset.

But the greatest risk comes from a possible variant of the virus which could bypass some or all of the vaccine protection, said Patrick Mathys, FOPH’s head of the crisis management and international cooperation section.

The Local put the question of whether Switzerland is too lax in its current approach to managing the pandemic to Nicola Low, professor of Epidemiology and Public Health at University of Bern.

“Switzerland seems to be somewhat out of line with other countries where the Delta variant is spreading in announcing further relaxations, rather than tightening measures”, she said.

“Right now, in my opinion, we should be more cautious because there are so many uncertainties about the situation”.

She added that “it is very hard at the moment to second-guess what the impact of the highly transmissible Delta variant might be, for several reasons”.

The first consideration is that the rate of spread in different countries is variable – very fast in the UK, but less so in other nations, including Switzerland.

But it is important to note that data about the proportion of cases caused by Delta are about two weeks behind, Low said, so the proportion now is actually higher than it appears.

On the other hand, she noted, the number of new cases at the moment is low and the reproduction number (R-number) — which indicates how fast the virus spreads though a community— has also remained low even since the last relaxation on May 26th, suggesting that cases might continue to go down.

And, the number of people who have developed immunity to Covid either through vaccination or recovery from the disease is also going up.

READ MORE: UPDATE: What are the rules for wearing masks in Switzerland?

What can be done to prevent another outbreak in the fall and winter, as was the case last year?

If certain restrictions are relaxed — for instance, larger gatherings are allowed and mask-wearing is no longer compulsory —alternative measures need to be strengthened, Low pointed out.

“The more measures, the better the control”, she said.

As far as the risk of  a third wave in the fall and winter, Low confirmed that Covid and other respiratory viruses are expected to increase. But, “it’s up to us how big this wave will be”.

She also added that “a rapid increase could happen if there is a superspreader event that is not detected and controlled quickly. These events are unpredictable by nature. So cantonal health authorities should assume that every single newly detected case might be caused by the Delta variant and act accordingly”.

READ MORE: EXPLAINED: What Covid-19 restrictions are still in place in Switzerland?